The NT Government continues to focus its alcohol policy reforms on “problem drinkers”, seen as those who commit alcohol-related crime.
Minister for Alcohol Policy, Delia Lawrie, has introduced legislation to Territory parliament that gives police and the Alcohol and Other Drugs (AOD) Tribunal “additional tools to get problem drinkers out of public places and into rehabilitation”.
Police will have the power to issue an infringement notice to people drinking in a public place within two kilometres of licensed premises and causing a nuisance to other persons. This will be in in addition to their existing power to tip out grog.
The infringement notice will be linked to the Banned Drinker Register, increasing “the ability of police to target repeat offenders and direct them into treatment”.
Problem drinkers issued with these infringements three times in 12 months will be placed on the Banned Drinker’s Register.
The bill extends the definition of “alcohol related offence” to include people who are summonsed (but not arrested) for an offence.
It also increases the power of the AOD Tribunal to force problem drinkers into rehabilitation.
It will also be able to make orders that a person be subject to income management, including making ex parte orders in the absence of the problem drinker attending the Tribunal hearing.
“This means welfare recipients on the Banned Drinker’s Register can have their income managed until they complete treatment,” Ms Lawrie said in a media release on Tuesday.
“By targeting drinking in public places, and giving the AOD more powers to force problem drinkers into rehabilitation we can reduce anti-social behaviour and turn lives around.
“More than 60% of crime is alcohol-related, and the Territory Government’s Enough is Enough Alcohol Reforms have already seen more than 2,100 problem drinkers put on the Banned Drinker Register and drops in alcohol-related crime in the first six months,” Ms Lawrie said.
In the first six-month report on the impact of the Enough is Enough reforms, released in February, only assault statistics were given, comparing the six months from July to December in 2010 to the post-reform period of July to December, 2011. They showed a Territory-wide drop of 5.1%; in Alice, the drop was 8.4%; in Darwin, 12.1%. In Tennant Creek, however, there’d been an increase of 12.9%, with a footnote suggesting that this was related to a more proactive approach by police to domestic violence matters.
There were no statistics on alcohol-related property crime, of considerable concern in Alice Springs.
Meanwhile, in the wake of the Conservative British Government proposing to introduce a floor price for alcohol in the UK, a floor price at least for the NT has again become a hot debating point. Federal Liberal front-bencher Christopher Pyne yesterday told ABC 891 reporter Ian Henscke yesterday that it is “an idea whose time has come”. The Commonwealth has the power to introduce it into the Territory, he said, and he would be an “enthusiastic supporter” of such a move.
The Country Liberals Shadow Minister for Alcohol Policy, Peter Styles, reacted by saying that Mr Pyne is “too far removed from the Northern Territory to be weighing into issues associated with alcohol policy”.
He wants Mr Pyne to contact him for a briefing .
“The fact is that people will still get grog even if there is a floor price, as evidenced by the failure of the Government’s grog bans to stop anti-social behaviour,” said Mr Styles.
“Territorians are entitled to buy an inexpensive bottle of wine without an artificial floor jacking up the price.
“The only winners from a floor price are the large retailers who reap the profit from the higher prices.
“It’s already expensive enough living in the Territory without Government policy making it even dearer.”
Ms Lawrie has previously ruled out moving on a floor price for the NT, with arguments similar to Mr Styles’. – Kieran Finnane 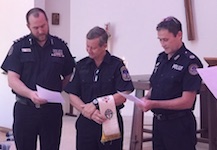