Home Issue 13 Night out on the town, and living to tell the tale
Issue 13Volume 19

Night out on the town, and living to tell the tale 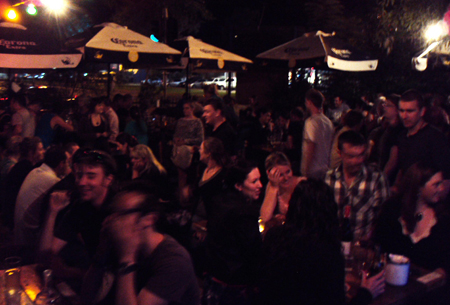 The Memo Club and the Town & Country Tavern closed their doors because they were not getting enough patrons through the door and that was a consequence of people fearing being bashed by increasing numbers of thugs taking over the CBD at night. Right?
Well then explain this, please.
Monte’s is about half way between the two now closed venues, in the same street.
Last night Monte’s (at right) was chockers – best guess about 250 to 300 people, clearly having a ball.
Many of them came by pushbike, judging by the number of tredlies – certainly more than 50 – tied to the fence, their riders clearly willing on their way home to brave the marauding hordes lurking to pounce upon them in the dark.
Some had made their way unscathed from the exhibition opening at Talapi, Alice’s newest gallery towards the middle of the mall.
As they left the opening they observed some brave souls enjoying the evening on the Sporties terrace opposite (below). Undoubtedly Red Ochre also had a crowd.
At Monte’s gate revelers were greeted by a Mormon bouncer who said “Bless you” and asked for ID (I was flattered that he thought I needed proof of age).
Inside the twenty-something to forty-something crowd was buzzing, not a cross word anywhere.
They were served their drinks and tasty, well-priced food by girls in Austrian Dirndls and blokes in Lederhosen – quirky!
When it comes to alcohol restrictions the place can surely lay claim to have one of the most idiotic conditions imposed by our hapless Liquor Commission: you have to be seated to drink.
End of evening entertainment as we know it? Maybe not. – ERWIN CHLANDA

UPDATE: A barricade has been erected in front of Town & Country and there are large signs reading, “Temporarily closed” and “NO alcohol stored on site /premises”.