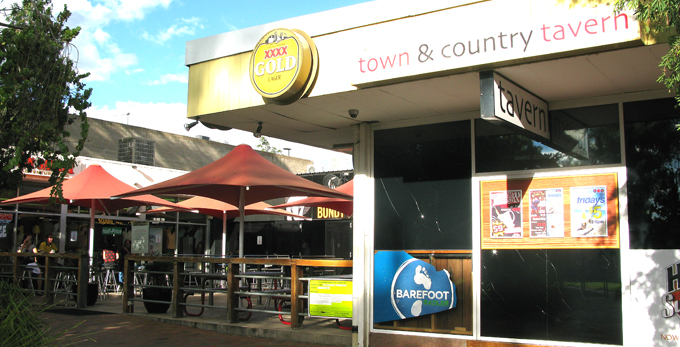 The Alice Springs Memorial Club has suspended trading,  gone into voluntary administration and “the committee is looking to establish a fighting fund for the people of Alice Springs to contribute to in the aim of reopening the doors as soon as possible,” according to a media release this morning.
And the Todd Mall bistro, Town & Country, is closing tomorrow.
Owner Geoff Booth, who is standing for councillor in Saturday’s election, says on Thursday the popular pub in the heart of the town will be boarded up and secured with razor wire.
Mr Booth says this follows declining trading over two years to now being just

“appalling” and “13 of 14 break-ins” just this year, each causing $800 to $1000 worth of damage.
Mr Booth says his and the Memo Club’s problems are very similar: “People are scared of the nighttime activities. After 5pm the town centre turns into a ghost town.”
He says an application to the Liquor Commission to create a double venue in that location had been withdrawn.
One part would have been tavern-style, and the other offering fine wines and boutique beers with gourmet tapas.
Meanwhile the Memo Club’s administrator, Tim Clifton, of Macks Hall Clifton, says the club was in danger of trading while insolvent, and the move will give it a breathing space of one month.
The debts are “not insignificant, but well less than $1m,” says Mr Clifton.
The main reason for the problem is clearly “not enough people coming through the door”.
During the month a proposition will be made to the creditors, to see if they will “accept some compromises of claims” and if agreed, the club’s management will be returned to the committee.
If not the club may be put into liquidation.
Meanwhile a Department of Justice spokesman says the club has applied to the Liquor Commission for a temporary suspension of its gaming machine and liquor licences.
The club has called a special general meeting for April 1 “and we strongly urge all members and the community to attend,” says the release.
The Memo Club dates back to when the army took over the town in 1940.
The release says: “They established a large camp at the northern end of town. Two Sydney Williams huts were erected at the foot of Anzac Hill. It became the first Memorial Club in 1947.
“The Second World War put Alice Springs on the map. It became one of Australia’s most significant military centres. More than 50 trains a week were coming into town in 1942/43.
“Apart from Darwin there was probably no place in Australia changed by the war as much as Alice.
“The population was approaching 2,000 in 1946 when the town’s ex-servicemen commenced proceedings to form a licensed club. Initially membership was to be restricted to ex-servicemen and the liquor licence granted in the name of the RSL.
“However, they recognised the need to also admit men who hadn’t served with the armed forces in order to trade profitably. So evolved the concept of the Alice Springs Memorial Club made up of exservicemen and associate members. The club was officially opened on Anzac day in 1947 at the foot of Anzac Hill.
“In 1951 the club moved to its present site 127 Todd Street. Over the years the Memo club has helped raise many hundreds of thousands of dollars and now the club needs your help.
“The Memo Club is the only community owned club with the only lawn bowls green in Alice Springs. The Memo Club supports many sporting bodies in Alice Springs, help us SAVE the Memo Club and to help keep the sporting clubs,” says the statement released by the president and committee.
Mr Booth says he bought Town & Country six years ago when it was called Scotty’s and occupied only the southern side of its present complex. He expanded the small beer garden and set up a second bar and large kitchen to take up the entire former courtyard and the former Opal shop behind.
Mr Booth says his other ventures, the Gillen Club and Club Eastside, are doing well.
PICTURES: Top – Town & Country Tavern. Note green sign for extended liquor permit application – now withdrawn. Photo by Hans Boessem, Todd Camera Store. Above right – The Memo Club.

From the frontline: Kids thieving for drunks, take-away restrictions nail in coffin of tourism?

“I’ve met Germans who have a beer with their cornflakes,” says Jason Adami, licensee of Sporties, the restaurant in the Mall near the sails.
He says overseas visitors are bamboozled and irritated by the town’s alcohol regime which, he says, achieves little anyway.
A local of 26 years’ standing and son of the hospitality identity Pat Adami, Mr Adami says while the global financial crisis is doing much damage to the town’s tourism industry, the “unrest” and the alcohol restrictions are just about finishing it off.
And he says it’s not the drunks that are the main problem, but the kids who are doing the drunks’ bidding: “They send in the kids. For the kids it’s excitement.”
Recently still unknown thieves broke into Mr Adami’s business by breaking loose an airconditioner, and gaining access to the bar through the roof space. They did thousands of dolllars worth of damage. The loot was a few bottles of spirits.
“I leave work at 11pm and I see packs of 30, 40 kids, some of them as young as nine,” says Mr Adami.
He says public drunkenness needs to be curbed. It’s now “way worse” than people just being humbugged for cigarettes and cash: “Now it’s stabbings, bashings.
“I’ve said it for years, jail should be jail, in the sense that you should fear the fact of going to jail. It’s a holiday camp now. That’s a well-know fact.”
Mr Adami says if take-away alcohol is the problem then it needs to be fixed without further hurting the tourist industry. He says he would have no problem with extensive restrictions so long as the “bona fide traveller” principle were applied to tourists.
This could include 24/7 trading for people who can prove their normal domicile is outside – for example – a 1500 km radius from Alice Springs.
He says some of his colleagues in tourism expect a downturn this year of as much as 30% to 50%.
“We hear so many horror stories about the take-aways. We need to go further than that.
“People should be able to have a beer on their own land, their own environment. They come here and all they want to do is drink.
“If they misbehave they get booted off their own land.
“They’re not going to stay in the desert. They have long ago lost the skills for that.
“They come to town, and cause trouble here.”

More ways than one to make good compost

By GEOFF MIERS Well composted home-made organic matter is rich in nutrients, makes for great soil conditioner, can be used as a mulch and when...
Read more
Issue 52