Home Issue 12 LETTERS: How to fix the footpaths. AND: How many more children with...
Issue 12Volume 19

LETTERS: How to fix the footpaths. AND: How many more children with foetal alcohol syndrome will be born? 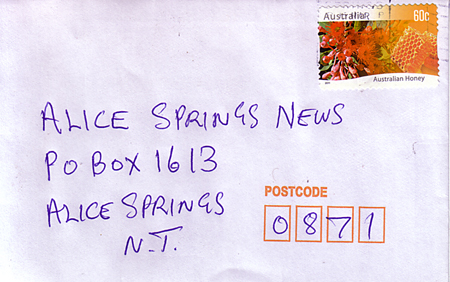 Sir – I am looking forward to the upcoming council elections.
Along with all the other items on the “to do” list for everyone, could the footpath program be upgraded a bit?
Old Eastside residents have paid rates since 1971 (council’s birth), not to mention other areas of town.
If this is not possible, maybe $2000 could be added to the sale price of houses to pay for a footpath outside the “sold” houses, so that the new residents won’t have to bother the council (when they get ’round to that street).
If this happened a couple of years ago there would be a lot less work for the council (when all the people left town).
This would free up council to spend he rates in a better way.
Could you publish candidates’ phone contacts, please? [ED – you will find them here, Mr Petersen]
(Mr) Kim Petersen.
Resident for 42 years.
Alice Springs

Image: Snail mail Letters to the Editor – we don’t get many but we love them just as much as their digital cousins. Erwin Chlanda, Editor.

Sir – I can respect an answer of no to the question of alcohol takeaway-free days. I think such an answer is wrong, and ill-judged in not seeing the need to start the process of breaking down our over-indulgence in alcohol. But if it’s an honestly held belief, clearly given, I can respect it.
I welcome an answer of yes to the same question, and will vote for anyone willing to take that stand to help them gain a seat on Council.
But for those who are waiting to be persuaded, who are playing the odds by placing an each-way bet in the election lottery, I can only wonder what are you waiting for.
When I was a teenager, my parents chose to adopt a handicapped child. Without knowing what they were getting, they adopted a three year old girl with foetal alcohol syndrome. All my adult life I have watched this girl, now woman, fail to grow into anything that could be called an autonomous life of her own. And I have often wondered what her mother was thinking, and what the society her mother lived in was thinking, to allow this to happen.
Perhaps they really didn’t know. Foetal alcohol syndrome was a new idea in the sixties, so they may not have. But it’s not new any longer, and we do know.
It is possible to say we all have to make our own choices, and the young mother drinking on the streets of Alice Springs today is doing so of her own free will. The same cannot be said of the child she will carry.
And of course she will get pregnant, as young girls do, and the child will likely be born damaged and never have a chance of a full life, and this entirely predictable outcome will be through no fault of the child’s.
The mother does carry some blame, but coming from poverty and ignorance does allow for a mitigating circumstances, a diminished responsibility, argument. What is the structure in her young life? Who are her teachers, her role models?
We are truly kidding ourselves if we try to argue that none of this can be sheeted home to us, the people who make up the larger society this girl lives in. And unless we want our park benches and Ward 1s to continue to fill with damaged souls, unless we want to go down the road being travelled today in places like Halls Creek, we really do need to start the long process of challenging the prevailing notion that it’s OK if we all go drinking now.
Closing the bottle shops on one day a week is such a small ask and such a small beginning, and it’s so selfish, I think, not to support it.
Hal Duell
The Gap, Alice Springs