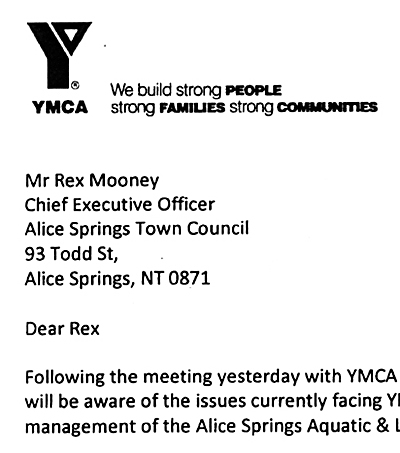 By ERWIN CHLANDA
The YMCA has asked the Town Council to pay it an additional amount of up to $45,000 a month “over and above the existing subsidy” for managing the town pool. The request was made by Fiona Davies, president of YMCA Central Australia, in a letter in December last year which proposed “a new business model with a new business plan and budget for presentation to Council at its March 2012 meeting.”
The letter has been leaked to the Alice Springs News Online.
The council is dealing with the issues behind closed doors: in reply to enquiries yesterday the News was told by council CEO Rex Money that he is “constrained by confidentiality”. (see posting below).
We have now asked Mayor Damien Ryan whether the council has been and is paying the requested money to the YMCA; if so, for how long has this arrangement been in place and how long will it be; what the council has done to resolve the situation and why has the job not been re-tendered.  We will publish Mr Ryan’s reply if and when it comes to hand.
Ms Davis says in her letter that the Alice Springs Aquatic and Leisure Centre “has dealt with a range of personnel issues, higher than expected energy costs and much higher staff ratios than was first expected, leading to substantial deficits over and above the subsidy provided by the Council.
“Since April 2011 until October 2011, YMCA Central Australia has funded this deficit to the extent of $280,000.”
Her letter says the appointment of an “excellent aquatic manager” had already made “a major difference” and it’s expected “these positive trends will continue”.
The News reported last month on defects at the pool, revealed in an earlier confidential report obtained by us as a “major problem”.
The council awarded the tender for the “management of the Alice Springs Aquatic & Leisure Centre” to the YMCA of Central Australia for $2,271,500 in 2009/10. (UPDATE.)
The agenda of this month’s meeting indicated there would be a report in confidential by the Director of Technical Services about the aquatic centre. Other confidential reports were to deal with the landfill compactor and the Todd Mall shade structure, destined to be removed as part of the CBD revitalisation project. The director of finance was to report on budget amendments. The News has asked Mr Ryan to comment on these matters as well.

OK, guys, why can’t we get a straight answer on this one?
The Alice Springs News Online had a phone call yesterday from someone requesting anonymity. What that person told me prompted me to send the following email to Mayor Damien Ryan and Town Council CEO Rex Mooney.
“I understand the YMCA has under-tendered for its management of the pool. Takings from attendance, and as a result, earnings, are well below expectations. The council is paying them half a million dollars more [in excess of the contract] during the life of the agreement (1 or 2 years?). This bail-out has not been made public. The proper course of action should have been to re-tender the contract. Could you please comment on this?”
Mr Mooney responded yesterday: “Erwin,  thank you for your email. My comment is: I am constrained by confidentiality to comment on the assumptions conveyed in your email.”
Mr Ryan (pictured) replied today: “Erwin … any questions on operational issues need to be directed to the CEO.”
We sought comment yesterday from the YMCA by requesting pool manager Ian Jones to pass a message to Helen Sargent who is apparently the YMCA person in charge of the contract. I made the same request today to a lady who answers the phone at the Y. She told me no comment would be made before “Tuesday when the acting CEO will be at work”.
I left a message on the mobile of the Y’s CEO, Ray Smith. No reply from anyone. (I have since been told he has left.)
Whose attention has it escaped that a week from today will be arguably the most crucial council election in the history of this town?
Have some people not cottoned on yet that transparency and leadership – which includes the judicious spending of public money – are among the key issues?
If this rumor is not true then, Mr Mayor, say so. If it is then let’s have the facts, all the facts, and let’s have them now, not after the voters have been sent to the ballot box in ignorance.