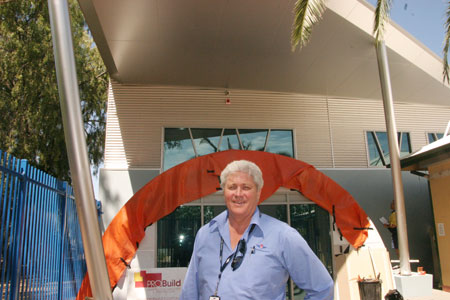 While most of Alice is grumbling about the decline of the tourism industry, a new wing worth more than $3m of the Flying Doctor base is nearing completion.
It includes a mini department store, with a life-size replica of the service’s Pilatus PC12 workhorse (you can sit in the pilot’s seat), and a 70 seat theater fitted with all that opens and shuts for watching movies to video, audio and data links for remote conferencing.
Manager Michael Toomey says the store will be an upgrade of the souvenir shop and benefit from “co-branding” with R M Williams.
The theatre will be where visitors watch the movie about the legendary service founded by Reverend John Flynn in 1928 with a De Havilland DH50 aircraft leased from Qantas for which he paid two shillings per mile flown.
Today the service has 61 aircraft around Australia and employs 900 people.
Alice has a staff of 25 (in the operational side) plus 10 (in the tourism side), and four PC12s worth $6.5m each when purchased new.
The Swiss-built turbine powered planes are well suited for dirt strips and are powerful enough to take off from relatively short runways.
Although the “flying doctor” label is only half true these days – the doctors and the tasking comes from the NT Department of Health – the organisation continues to make the most of its glorious history, while expanding its services to the local community.
For example, the theatre and its gadgets will be for hire to users ranging from local fundraisers to businesses training staff to hotels keen to get into the smallish convention market, without themselves having the facilities.
Will this be in competition with the Convention Centre?
“We’ll work with them,” says Mr Toomey.
The RFDS sees this kind of diversification as the key to survival of the local centre as a tourist magnet.
Mr Toomey says visitation is down about 20%, and that applies about equally to domestic and overseas visitors.
Tour travel is about 60% of the base’s business.
The industry is incredibly fine tuned: gone are the days when it talked about getting people to stay an extra week.
The task now is get them to stay an extra 20 minutes.
The tour companies set an unbending time table: 40 minutes for the RFDS. Admission $12.
Mr Toomey wants to stretch that to 60 minutes but it will take a year: “We will educate them this season so they accept it in the next.”
Most group tourists stay in Alice one night but some don’t even do that.
The extension to the base is a bid to boost income from the tourism operation, in part by offering a longer movie and better shopping.
Mr Toomey says the base is in a “good corner” with the Pioneer Women’s Hall of Fame next door and the Reptile Centre across the road.
He is also meeting regularly with about a dozen local operators to enhance the town’s offerings to visitors.
Fingers crossed they come up with something soon.
PICTURE: Mr Toomey at the entrance to the new building which takes its inspiration from an aircraft wing and struts. The semi-circular entrance hints at the shape of a hangar.