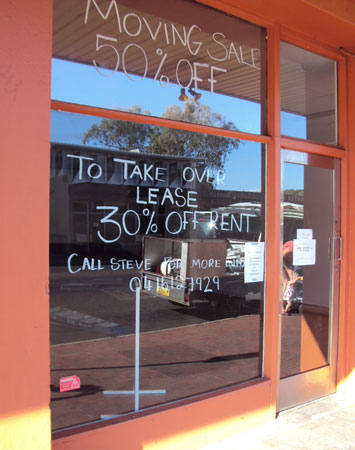 By KIERAN FINNANE
La Casalinga Restaurant, an icon of local dining, is now a solitary island in a sea of closed businesses along Gregory Terrace, at the southern end of Todd Mall in central Alice Springs.
Not all businesses have ceased operation – the last to go are two private Aboriginal art galleries, one moving to premises in the mall, the other to an address in Smith Street. The Smith Street/Hele Crescent area is in fact seeing something of a revival as the centre of the town goes through its shuddering readjustment.
L J Hooker is the property agent of the Gregory Terrace strip. Managing Director Doug Fraser suggested the twin evils of the European debt crisis and the high Australian dollar have impacted on tourist numbers to Central Australia and consequently on businesses geared to the tourism trade.
He said he could not comment on the “effect, if any, the number of vacancies have had on rental levels”.
As a sign of the impact of online trading, it’s worth considering that the first businesses to vacate this strip were tour booking agencies, the kind of business that would seem to be made largely redundant by e-commerce.
Meanwhile, “Bringing Business Back to Outback Australia” is the theme for a special meeting hosted by Desert Knowledge Australia Outback Business Networks this Friday. Among the four presenters is Marcus Westbury, who will discuss Renew Australia (Renew Newcastle), an innovative strategy which was used to rebuild Newcastle in 2008. Since then more than 70 new businesses and initiatives have been seeded and the town was hailed by Lonely Planet as one of the top ten cities in the world to visit in 2011. 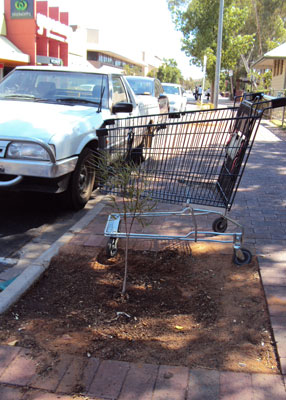 Apparently by coincidence outgoing Alderman Murray Stewart, a native of Newcastle, suggested last week that the Town Council write to the NT Government requesting that it initiate a “Renew Alice ” strategy. He didn’t get support for his emotion but it seems that the spirit of  renewal is in the air as a Facebook group under the name “Renew Alice” (adopted without knowledge initially of the Newcastle-grown strategy) is a lively and growing forum for all sorts of ideas about the future of the town.

UPDATE – COMMENT, February 22, 2012: Ald Stewart, and for that matter his colleagues, seem to be forgetting that the Town Council has a renewal process in train, funded to the tune of $5 million. But despite the hand-wringing about the on-going decline of the town centre, there is no sense of urgency about its implementation.  Where is the enthusiasm for and communication of its promise – for example, a public note of congratulation and celebration of the international award won by the creative brief for Parsons Street, authored by Mike Gillam? Where are the early initiatives, such as tree planting, that could impart a real sense of renewal and determination now, when it is so keenly needed? A few small saplings have been planted in Hartley Street but without tree guards. It’s as though we are just waiting for them to be destroyed, to then throw our hands up and say it was all too hard. Then we’d be able to fill the holes in with concrete, following the trend of that has been the hallmark of this council’s urban works. – K.F.

Pictured, top: Further fields (in Todd Mall) were greener for this Gregory Terrace business. Right: A vulnerable sapling in Hartley Street. Set up to fail?

See our report from last year about other local enthusiasm for the ‘renew’ movement.

Netball: Under 17s to battle out the match of the night

By STEVE MENZIES There are interesting contests through the grades as the KFC Alice Springs Netball season approaches the third way through this evening. Four of...
Read more
Issue 52