The creative brief for the redevelopment of Parsons Street in Alice Springs’ CBD has won an international award.

The brief, titled Revealing the Spirit of Parsons Street, was prepared by photographer Mike Gillam who is also well-known for his long-time commitment to the preservation and protection of our natural and cultural heritage within the urban environment. 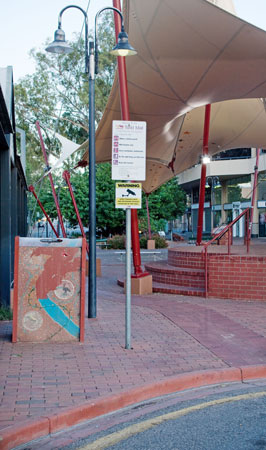 Mr Gillam was commissioned to develop the brief as part of the CBD revitalisation project.
The Green Dot Awards celebrate “excellence in green products and services”. Mr Gillam’s unusual entry stands alongside other first prize category winners  such as the Copenhagen Wheel – an electric bicycle that generates its own energy while pedalling and braking – and the work of a Hong Kong based architectural firm, Aedas Ltd, specialising in sustainable design.
The awards were established  in 2008 by the Farmani Group, which has galleries in Los Angeles and New York, is publisher of VUE Magazine and has founded a number of other awards and charities. The Green Dot Awards are judged by an international jury made up of business people, designers, artists, writers and editors with ‘green’ credentials.
Recognition of a project by the awards is designed to give consumers confidence that the project can be trusted as excellent in its environmentally-sustainable practices.
Mr Gillam described his brief to the jury as “an informing philosophy for designers, architects and artists who intend to work in Parsons Street”.
He wrote: “Alice Springs is a troubled and polarized town. Beyond the media stereotyping of stabbing deaths and racially motivated assaults, this is also a place of hope and promise, where inter‐racial respect and friendship has persisted against a backdrop of violence.
“This untold story of Alice Springs emerged gradually and grew unexpectedly through my research on Parsons Street and its namesake, Hon.J.Langdon Parsons, the most senior government official in the Northern Territory from 1884‐1892.”
An architect  whom Mr Gillam had approached in the course of the peer review process of the brief urged him to submit this project to the Green Dot Awards.
He says the timing of the prize announcement has nothing to do with the upcoming Town Council elections.
A detailed account of the brief was presented on this site in October last year.

Pictured is Parsons Street now: this choked sightline will be de-cluttered in the redevelopment. Photo by MIKE GILLAM.