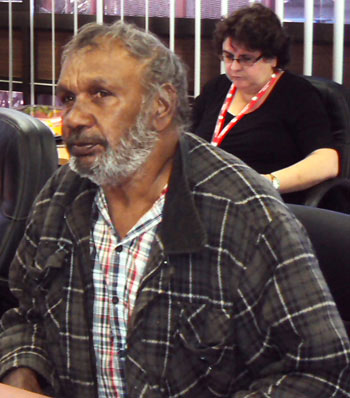 The CEO of the MacDonnell Shire Council has hit out at the Murdoch-owned NT News over its attacks on shire president Sid Anderson.
Diane Hood says Mr Anderson, who was convicted for murder, “served time in prison when he was a teenager and in his early 20s.
“He is now 58.
“Sid has never made a secret of his past actions and time in prison.
“In fact he uses his experience to teach and mentor others as to consequences of actions. Sid used his time in prison to learn a trade and to learn to become a better person,” says Ms Hood.
“In working with him at MacDonnell Shire he has impressed me with his dedication to his constituents, his hard work and diligence in working with both indigenous and non-indigenous people and organisations to do all he can to improve the quality of life across the Shire.
“Sid takes the view that we all need to work together, talk openly and keep moving forward to improve things for all of us. He also has the earned the respect of the Aboriginal people and Council staff across the Shire. I admire his hard work and attitude.”
Ms Hood says the reporter, Nigel Adlam, also makes reference to the salary of the shire’s previous CEO, comparing it to the Prime Minister’s.
“Unfortunately his assertion is simply untrue.
“He also refers to MacDonnell Shire’s potential outsourcing and referring to loss of jobs and a call centre – again, untrue.
“There never was a call centre and no jobs were to be transferred. The tender was for outsourcing of IT
development and processes.
“This was all communicated to the press at the time.”
Ms Hood questions the motivations behind frequent references to President Anderson’s past “with no attempt to mention the hard work and positive outcomes since he served his time in prison”.
She says this is not in keeping with the Northern Territory she grew up in.
“After all, when someone does wrong, serves their punishment and then reforms to do and help their community through public service, I for one believe that is what the story should also include – an example of positive change.”

Pictured: MacDonnell Shire President Sid Anderson at a shire council meeting in early 2011. Ms Hood is in the background (she was on the executive but not CEO at the time). Photo from our archive.