Making decisions: it's a tough business

By KIERAN FINNANE
An audience of aspiring aldermen, roller derby enthusiasts and media watched the Town Council get back into business last night, with its first meeting of the year and one of the last for its term. With local government elections looming at the end of March, it was instructive: we saw aldermen struggling to make firm decisions, to reach consensus, to be consistent, to identify problems of enforcement and budgetary constraints … and to get through the agenda in a timely fashion (the open meeting didn’t finish till around 10pm and there was still quite a bit of confidential business to get through).
The issue of the night was about allowing the growing local roller derby league access to the basketball stadium. Seemingly stung by a spate of publicity on the issue, council’s Director of Technical Services, Greg Buxton, had prepared a blow by blow report, with attachments A to R as well as 1 to 14, with the critical information being around the potential damage to the stadium’s floating timber floor.
Despite his efforts, Mr Buxton’s recommendation ‘A’, that council confirm that the basketball stadium not be used for any roller blade or hard-wheeled sport, did not get up. After much to-ing and fro-ing aldermen preferred to go only with the softer ‘B’, that council continue offering its assistance to the league with securing a permanent venue for their sport. What this will mean in practice was not made clear although, with any luck, the issue will be settled by the league itself: members are fundraising to buy a transportable skating ‘court’ (for $35,000) and are in negotiations with the Youth Hub about locating it.
With nothing like the voluminous paperwork to hand, debate over the removal of graffiti got to a more precise end point but must have made some aldermen wonder why council took the heat on its new graffiti by-laws when they appear not to have been enforced. Where graffiti is on privately owned property the by-laws allow council to require that property-owners remove it. Failing to comply is an offence. To soften the hard-line, council may provide a removal kit or voucher for materials but it was revealed last night that this has never occurred. Director of Corporate and Community Services, Craig Catchlove, said it had never been needed until the last couple of months. Ald John Rawnsley suggested in response that the by-laws either be implemented or changed. 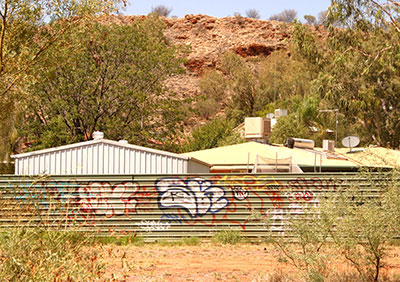 Aldermen supported Ald Sandy Taylor in her motion to have painted, as a one-off, the fence at the back of Nelson Terrace facing Larapinta Drive, with costings reported back to council. In Ald Taylor’s view graffiti removal along this strip of corrugated iron fencing would “defy” the powers of any one individual. Her colleagues and CEO Rex Mooney worried about the action setting a precedent – if the council assists these property-owners, why not others?
Ald Rawnsley prepared the way for that by proposing a second motion that officers prepare a report on costings to council of cleaning up all fences facing arterial roads and the rail corridor. This was carried, with Ald Brendan Heenan raising the possibility that trusties from the gaol may be able to assist.


COMMENT: Discussion of this initiative focussed on the appearance of the town for both residents and tourists, but aldermen kept it simple: plain ugly seems to be OK, graffiti not. While graffiti-ists are not always discriminating they do have a marked preference for corrugated iron fences – the scourge of the local streetscape –  and vacant buildings. The steady accretion over several months of graffiti on the vacant Commonwealth Bank building in Parsons Street is a case in point. The owners have apparently never been required to remove the graffiti … nor do anything else to maintain the external appearance of the property. Its glass frontage is smashed, filthy, and partially boarded up. This isn’t a problem but graffiti is?


OTHER COUNCIL BUSINESS:
• There has been no response as yet from the NT Government to council’s proposal about taking over infrastructure services on the town camps.
• There’s been no response from the Minister for Local Government to council’s letter protesting changes to the way votes will be counted in the coming local government elections.
• Council is looking for sources of funding to continue Alice Solar City beyond its close date of June 2013.
• There will be a report to aldermen about an exit strategy for council’s Cash for Container scheme at the February committee meeting. Over 16 million containers have been recycled thanks to the initiative.
• Ald Eli Melky urged a review of council’s public places by-laws, suggesting that despite enforcement efforts and expense to council the town is still dirty, the river is still full of broken glass and cask bladders, there are still drunks in the streets and people who don’t use toilets when they should. This was contested by Mr Catchlove, who claimed that implementation in the hands of the expanded ranger force had yielded a “fantastic outcome for the town”. He reminded Ald Melky that being drunk in public is not an offence. Ald Murray Stewart agreed with Mr Catchlove, saying there had been a great improvement to the cleanliness of the town over three years. This view was supported by Ald Sandy Taylor and Ald Liz Martin.
• At the end of the long meeting Ald Samih Habib Bitar, chair of the Community Safety Committee,  wanted aldermen to discuss “law and order” now that the extra complement of police officers, here to implement “Operation Thresher” over the summer, is leaving town. He was asked to formulate a motion to debate. He proposed:”Where to from here?” Not surprisingly, the tired aldermen turned him down.