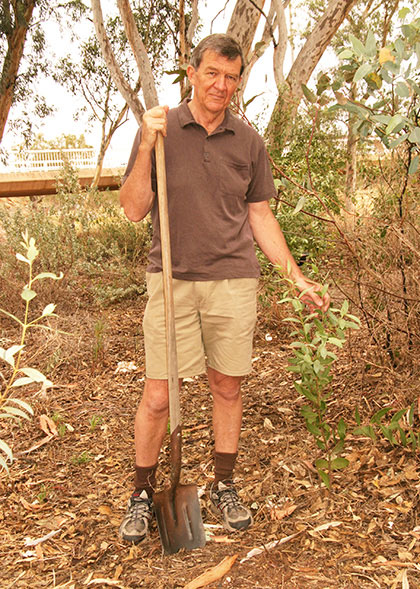 Citizen action is part of the answer to management of the Todd River.
The current state of the river corridor is “our problem, the community’s problem”, says Ken Johnson, who has lived close to the river for 15 years. Over the last two years he has adopted the section of east bank between the Wills Terrace causeway and the Stott Terrace bridge and made it his business to control particularly buffel grass but also the couch along that stretch. The work has paved the way for the return of a wide variety of native grasses and shrubs such as plum bush and the birdlife that comes with them.
Dr Johnson also happens to be the former regional director of Parks and Wildlife but it was just an ordinary man with a shovel and a love of the bush whom the Alice Springs News Online met on the weekend.
When he started, buffel grass was growing waist-high through this area and so thickly that it had pushed almost everything else either out of sight or out altogether. At the right time – in a vigorous growing phase – he sprayed both it and the couch, being careful not to spray anything else. He achieved a good kill rate of the invasive grasses and since then it has been a matter of following up to check for new seedlings, which he usually disposes of with his shovel. 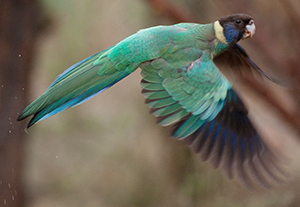 In the last week this has meant working on three mornings for about an hour and a half at a time to cover the full stretch. Over the two years he’s done follow-up maintenance roughly every six weeks, depending on the rainfall. There are fewer and fewer buffel grass seedlings coming up but he’s keeping a sharp eye on the couch, expecting that it will begin to encroach more as the buffel is suppressed.
There are other weeds, such as wild cabbage, but he ignores those – they’re likely to recede as we move into drier times. He also ignores the thick buffel growing on the mid-channel islands a few metres away. He keeps focussed on what he has decided is a manageable area for him to work on as one person.
The initial spraying two years ago required a more intensive effort, a couple of hours each morning over a week. He used a spray unit mounted on a trailer hooked up to a car. It’s owned by the Alice Springs Landcare group which also had funds to buy the herbicide he needed. Dr Johnson regards this much support as essential and it’s also nice to know that he’s not a ‘lone ranger’: there are other individuals and small groups looking after other tracts of bushland around the town, notably in the Spencer Valley and on Northside. 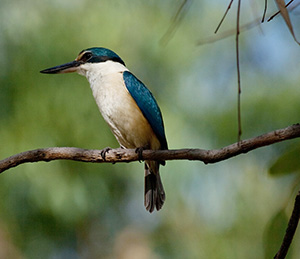 Leaving the river banks, we walk back through the mown parkland along Sturt Terrace – through tall trees, mostly eucalypts, but no understorey.  What does he think about the way this area is being managed?
“From my perspective I’d like to see it managed as an open riverine woodland with a greater diversity of shrubs but it would take a fair bit of looking after and council does have finite resources.”
What kind of management would he like to see along the banks of the whole of the Todd and Charles in the town area?
“I’d love to see all the banks managed something like this [the area he has restored], so we don’t keep losing all the old trees.”
What would it take to establish a long-term viable plan to reach this goal?
“There’s a difference between a plan and things happening. It didn’t require a big plan to do what I’ve done. It requires people with a commitment to implement what is really a simple thing, over the long term. And it requires that bit of support with resources. There is a lot that individuals and small groups can achieve working together with a body like Alice Springs Landcare.”

ED – A heartening story about the possibility of citizen action is told by Mike Gillam in his comment on ‘Looking good!’. 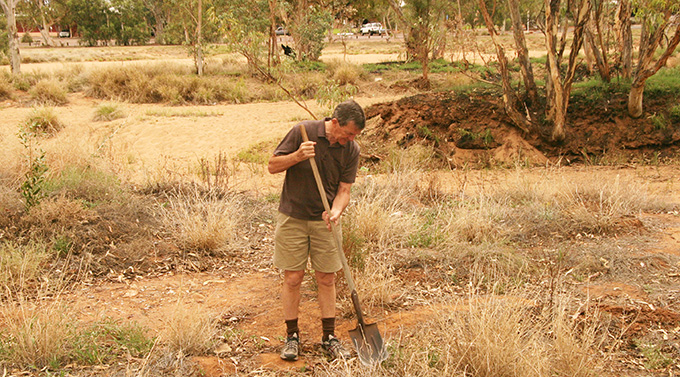 Pictured from the top: Ken Johnson on the east bank of the Todd, amongst the native plum bush that has returned since he cleared the area of buffel grass. The Stott Terrace bridge is in the background. • Birdlife in the area, photographed by Mike Gillam – a ring neck parrot in flight (top left) and a kingfisher. • Dr Johnson focusses on an area he can manage, ignoring the infestation that can be seen on the mid-channel islands, the closer of which has recently fed a fire and is now greening up.