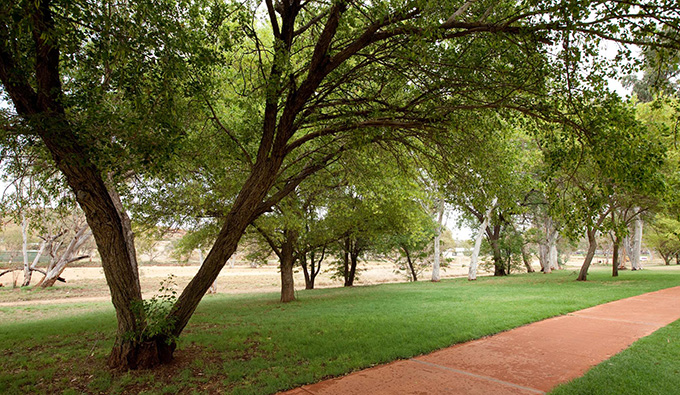 As we ‘speak’ there are crews of trusties from the gaol in and along the Todd River, slashing the grasses around the base of mature trees. It seems that the message has gotten through that the community wants these trees protected from fire and urgent action is required. But there are other river management issues to consider.

“With trees you can talk of death by fire, but you can also talk of death by mowing.”
The debate around protection of trees in the Todd from fire has expanded to broader river management issues. For instance, why, in the stretch of the Todd between Schwarz Crescent and Wills Terrace, does there appear to be practically no regermination of the river gums? On the eastern bank of the river the natural vegetation has been utterly transformed by the planting of exotic species, mowing and irrigating. The view across the river is all but unimpeded. There are a few surviving giants in the riverbed and nothing else. If they were to be destroyed by fire, would we have succeeded in sterilising the river?
The Alice Springs News Online asked Sunil Dhanji, former project officer for Greening Australia’s  Todd and Charles Rivers Biodiversity Project, what he thought might be going on.
Mowing is important for knocking down bulk fuel, he said, but the crew need to identify and avoid germinants (new growth).  Doing this has to be built into the crew’s work program; the crew needs to understand what they are doing and why. Getting this kind of management happening depends on having a vision of what you hope to preserve and promote in the landscape.
Mr Dhanji says this is the weakness in the Town Council’s management of the river. The talk has been done, enshrined in the Alice in Ten documents – the river was to be kept “wild at heart” and respected as a “river through time”. But these themes have never been used to create a focus for work programs in the river corridor. 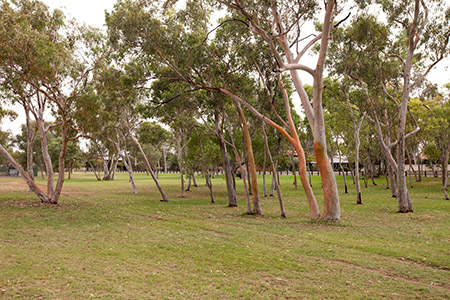 Another weakness is the difficulty council has in working with community groups. Community energy, including that of trusties from the gaol, could be harnessed much more effectively, beyond rubbish collection and a couple of working bees, says Mr Dhanji. He points to the very noticeable difference along the river’s east bank between Wills Terrace and Stott Terrace Bridge, where the efforts of private citizens have made a big impact on buffel and couch grass.
Mr Dhanji says it’s important to differentiate between “eradication” and reducing the impact of weeds and feral animals. It can be almost impossible to eradicate them but it is important and possible to reduce their impact. One way this can be done in and along the river is by keeping the area around the base of the trees, especially the trees with hollows, clear of buffel and couch, while allowing for regeneration and diversity of vegetation.
It takes more time to work this way but the end results are worth it: take a walk along the east bank behind the Chifley Hotel. Suddenly you are in a different world. This is what the “wild river” looks like. The big old trees are there, sure, but not choked by buffel, and not standing alone as the last survivors. At their feet are countless small herbs, grasses, shrubs, including the beautiful night-flowering native passionfruit. There is a lovely sense of seclusion, although it’s stone’s throw from a busy road and not much further to suburbia.
It’s also just a short walk across the bridge from the Civic Centre. Perhaps an excursion into this little wonderland is the spark necessary to ignite the Town Council’s imagination on this issue. The Alice News asked the Mayor and aldermen this week whether they would direct that urgent fuel reduction be carried out in the river corridors, with particular attention being given to the protection of all trees.
Only two of them bothered to reply – although it does seem that they have now taken action.
Alderman Jane Clark said: “You raise a valid point.  I’ll put this to Council in the ‘other business’ section of the Ordinary Meeting if it is not addressed prior. In my opinion this is the result of over 20 years of neglect.  Realistically we will be able to save only some of our trees but if we don’t act, we won’t save any.  In another 20 years, which passes in the blink of an eye, there will be no river red gums left.
“We have asked the NT Government via NRETAS to clear weed fuel and in particular mexican poppy south of the gap.  I will get an update on progress of that request too.”
Ald Brendan Heenan said he put up a motion a few months ago, asking if the prisoners’ work program could reduce the fuel load around the trees on the banks of the Todd River from the John Blakeman bridge out to the end of the rural blocks along the Ross Highway.
“The areas in the town could use the prisoner program to help reduce the fuel load in and on the banks of the Todd River. We would need to ask the CEO the best way to do this,  either a motion from Council or just a phone call from the CEO.” 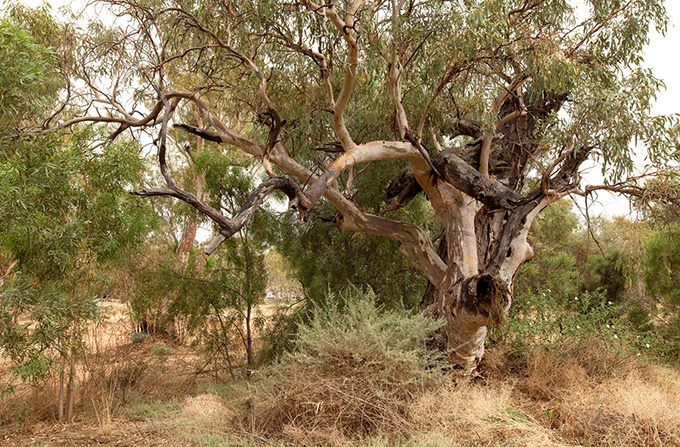 Pictured: From the top – A tamed river , utterly transformed by the planting of exotic species, mowing and irrigating. Are we rendering it sterile? This is the east bank of the Todd between Schwarz Crescent and Wills Terrace. • Further along the east bank, south of Wills Terrace, eucalypts predominate but mowing has removed the under-storey, significantly reducing species diversity . • The wild river – private citizens’ efforts to suppress buffel grass and couch reveal the river as it could be. This section is behind the Chifley Hotel, just north of the Stott Terrace bridge. All photos by MIKE GILLAM.

Top-down Budget: Launch in Darwin, Alice gets it on social media

Missing young mother may be unaware of concern for her and her baby: Update

Why is it so hot? A combination of factors is causing this heat wave, says the Bureau of Metereology. "Primarily it's due to a lack of...
Read more