What a weekend! Art here, performance there and even more art over yonder! It started with the dance theatre production, Close To Me. Performances by a cast of people of  mixed abilities from Acacia Hill School and Life Without Barriers were so beautiful I was moved to tears several times! It was amazing to see Araluen Theatre packed out by such a diverse cross section of people. And I’ve never heard such pre-show raucousness and such a fast falling hush as the lights went out.
The next night it was out to Araluen again, this time to see the beautiful group show aptly titled, Sequences and Cycles: Contemporary Ceramics from the Desert. Pip McManus’ little, insignificant men set against vast and monumentally contrasting circumstances particularly enchanted me. 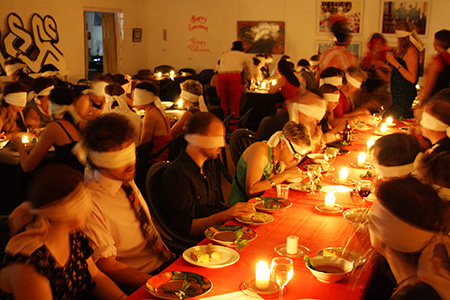 Then the next night to a dinner hosted by puppets at Watch This Space. I had already had, to varying degrees, two intensely emotive visual experiences and now I was being led into a room blindfolded and sat next to people I didn’t know to enjoy a most delicious meal.
The evening really heated up as a panel of sock puppeteers tackled some provocative topics and discussion whirled about the room: Can the artists of Alice Springs save us? Save us from what? Do artists have more social responsibility than others?
In discussion around greater Aboriginal access to ‘the arts’ the example of the gold coin donation entry to Close To Me was mentioned. This certainly helps people who cant afford regular ticketed prices. But in the case of Close To Me the drive behind the desire to attend probably had a lot more to do with the fact that family and friends were in the performance. Without relevance, acknowledgment and inclusion of Aboriginal artists in the artistic process there remains an assumption about Aboriginal interest in ‘white stream’ arts.
Are the arts in Alice Springs an escape from social injustice and difficult realities? For one, the purpose of the arts is to provide an escape vehicle from boredom.  For another, it is the very opposite: art is a reflection of the everyday, injustice and all. Another called for a more deliberate and conscientious use of the arts to address social injustice. 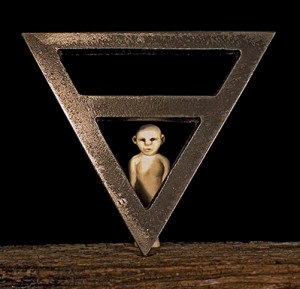 Here the elephant in the room raised his head and wanted to know: what crisis, issues and problems are we talking about? Can we cut through the arty farty posturing and say what we mean?
From around the room there were murmurs of ‘complexity’ and ‘difficulty in narrowing down’ to one core issue. But let’s try to start to name some of these issues: the depth of social inequality that leads to unequal access to opportunity and resources that leads to poverty and then to housing problems and lack of access to services like education and health. Or the despair that leads to alcoholism in Australian culture in general and its prevalence in some Aboriginal communities. The collision of two cultures that have travelled over huge distances, time and perspectives. Or maybe saying out loud and admitting that I live in and benefit from a system that is based on the theft of land from its Aboriginal people.
On Saturday night the Alice Springs art community was set on engaging with difficult topics, on trying to create really meaningful art and a greater understanding of our communities. I am grateful to be able to take part in these discussions and that freedom of speech isn’t really an issue. But I guess I also feel aware of the risk that these conversations become meaningless and bourgeois or predictable if they are only aired within artistic circles, they need to be taken out to the larger community.