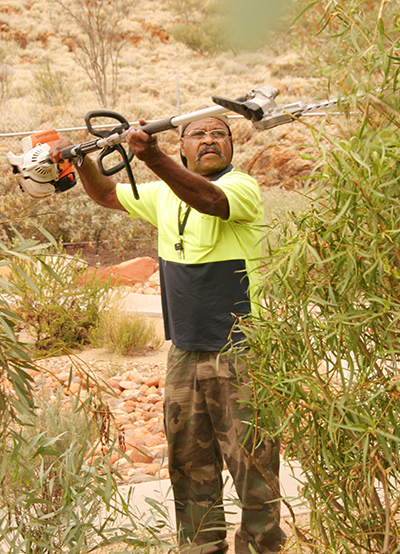 “Standing on our own two feet, that’s the beauty of it all.”
Thomas Warren is crewing for Arrernte Workforce Solutions, once a CDEP provider but now an independent Aboriginal enterprise, working mostly on grounds maintenance contracts and competing in the marketplace at commercial rates.
Mr Warren had been painting houses up in Darwin but he wanted to get closer to home. Most of his family lives in Adelaide so Alice Springs is half way there. He joined Arrernte Workforce Solutions 18 months ago, in the early days of its restructure.
This is the first time he’s worked for an Aboriginal-owned and -run outfit. He recognises the challenge of it being “totally independent” but “that’s why I’m still here”.
If more Aboriginal people were working and independent, “it would be a better world for us to live in”, he says.
“If I hadn’t worked all my life, I’d probably be an alcoholic. But that was never me, I’d always jump up and try something.”
In the past that’s included making artifacts and teaching others to make them in TAFE colleges.
What was the key thing that influenced his attitude to work?
“My old people. They had something in their hearts that said you had to get up and go, do something, don’t sit around being a lazy bum.”
I talked to Mr Warren on the job, working on the garden at the Central Land Council offices along with two other crew members, Neville Satour and William Cole.
Mr Satour joined three months ago. He had been mentoring at Tangentyere Council with the Territory Alliance (on SIHIP contracts).
“I felt like a change and I had a licence to drive the truck.”
Like Mr Warren, he’s been constantly in work: “I’ve got a good education and a trade background.”
He could find work anywhere but does he prefer to work for an Aboriginal company?
“It doesn’t bother me,” he says, “but it’s good to know most of the people you work with and good to do something for people, especially Aboriginal people.
“It’s a two-way street, it’s good for them to see other Aboriginal people doing something for them and to see us in employment.” 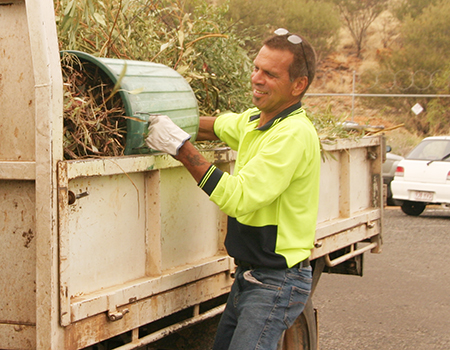 He knows there’s concern about too many Aboriginal people not working. What does he see as the issues?
“Family life, people up all night, not getting proper rest so they can get up and go to work the next day. There are economic issues too, not enough food, no clothes to go to work in. There’s health, alcohol and drugs.”
And work ethic comes into it: “When I worked for Tangentyere, I used to drive around to pick people up to work for CDEP, but only certain people would turn up.”
The critical thing is to have a “better family life which gives you a chance to get to work”, then earning a wage becomes a motivation, helping you give your family a better life, and so on it goes.
He says it’s “very, very good” to have Arrernte Workforce Solutions standing on its own feet: “We don’t have to put up with funding bodies and submissions.
“And we all know that we have to pull our weight so that we can pay our wages. We can’t slacken off or we’ll lose money and have to put people off.”
The company was close to folding when its CDEP funding was withdrawn. It probably would have, if its present manager, Damien Armstrong, hadn’t picked up the pieces.
“You need the right people in the right jobs, especially the bosses,” says Mr Warren in a tribute to his manager.
To an outside eye Mr Armstrong isn’t an obvious fit: he’s a reputed musician (of NoKTuRNL fame) and for years worked in the former Aboriginal Art and Culture Centre as a tour guide. The downturn in the tourism industry is responsible for him recycling into a new role: “Was a skilled guy like me going to sit around and do nothing?  Hell no!” he laughs.
He admits there’s a “social agenda” for him too, wanting the Workforce to become an example of a successful commercial business run by Indigenous people. 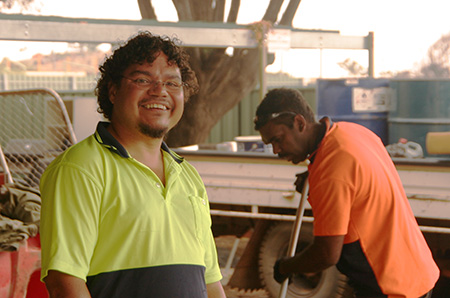 He says his past experience has equipped him well for the management role, the customer service side in particular. Tight administration logically had to follow – no use winning new contracts if the supply side, the billing, the balanced books weren’t all in place.
Today he’s got a full-time bookkeeper and a permanent crew of six men, working on different contracts in teams of two or three, five days a week or more. If it’s really busy Mr Armstrong himself will pick up a shovel – in fact I wouldn’t have known the Workforce was back in business if I hadn’t seen him doing just that, on a Saturday a couple of weeks back.
He’s also got two casuals on call and a “stack of resumes on my desk of motivated individuals who would like to come on board”.
He’s keen to grow the business so that he can employ more people but he’s careful not to stretch too far too quickly. At present they do grounds maintenance at a lot of corporate premises: he mentions the Department of Health clinics on Stuart Terrace, CAAMA, but also small independent businesses, like Country Diesel Maintenance, Creative Gifts and Awards, Red Centre Communications, and a number of private residences.
They’ve recently set up a vehicle-cleaning and detailing bay at the back of their premises in Kidman Street. With that, their yard is at capacity and they’d need to expand premises before taking the next big step they’ve got in mind, a mechanics workshop.
The yard is one thing that some might say gives them an unfair competitive edge  – it comes rent free thanks to the Indigenous Land Corporation. What does Mr Armstrong have to say on this point?
“It’s the only competitive edge we have. When our CDEP funding was taken away Arrernte Workforce was not ready for independent commercial trade. It’s been a struggle these last two years, to completely restructure and get to the point where we are now, with good secure trade and consistent employment of Indigenous people without being any burden whatsoever on government funding.
“As the further stages of our restructure are implemented and the business grows, we’ll look to assuming full commercial responsibility.
“In the old days our client base would get their yard done for a flat rate of $88 – that wouldn’t even pay for the administrative cost of sending out four blokes on CDEP.
“For us as a small business to come out of that situation and assert ourselves in the marketplace under commercial rates without any assistance at all is quite an achievement.
“At the end of the day we are Indigenous people who want to work, we’re not being forced to work out of fear of our dole being cut off.
“I’m a businessman, I’m into making money and employing people. As we become a more successful business, we’ll be able to give back to the community – because I reckon we’re here to stay.”
Pictured: Top – Thomas Warren pruning with an electric hedge trimmer.  Above left – Neville Satour ready to do a green waste dump run. Above right – Manager Damien Armstrong in the Kidman Street yard, Rennie Raff in the background.

Facebook
Twitter
Pinterest
WhatsApp
Previous articleAre fire vandals the only ones to blame for the state of the river?
Next articleWhat the climate change chat skimmed over