Home Issue 42 Are fire vandals the only ones to blame for the state of...
Issue 42Volume 18

People are arrested for deliberately throwing matches and setting fire to the landscape but who bears responsibility for allowing fire-promoting conditions to become entrenched? The Todd River corridor is a conservation zone and the Alice Springs Town Council has responsibility for its management. The Aboriginal Areas Protection Authority has given council a certificate permitting it to carry out “fire abatement management works”.
To the casual observer it would appear that precious little has been done in this regard and many a tree in the river has borne the brunt of our neglect. These grand survivors can be hundreds of years old. They also have special status as sacred to the Arrernte and are protected by law. Yet with last summer’s heavy rains, couch and buffel grass increased their stranglehold on the river and as they hayed off they provided the perfect conditions for fire vandals, mostly unchecked right up to the base of the trees.

The Alice Springs News Online asked council if it had undertaken, prior to the warmer weather, fuel reduction in the river corridors (including the Charles), particularly slashing and /or spraying buffel and couch grass in general and particularly around mature trees.
We also asked whether council is going to undertake future fuel reduction as the burnt out areas in the river corridors regenerate and hay off. We suggested that the regeneration phase is the perfect time for spraying with Roundup and making a start on getting rid of these alien grasses. To those who believe this is unrealistic, it’s worth bearing in mind the efforts of individuals and small family groups in the rural areas who have cleared buffel grass from densely infested blocks of up to 20 acres.
Director of Technical Services, Greg Buxton, replied:
“Earlier in the year Council made a decision to implement a mowing blitz across the municipality in response to large amounts of growth brought on by unprecedented rain events during 2010/2011. 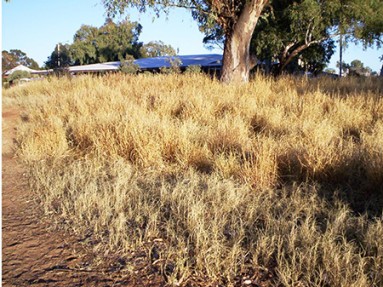 “This proactive initiative was successfully implemented and coupled with Council’s ongoing weed and growth program, which does include the Charles and Todd River beds, control of growth has been a priority for our teams.
“Alice Springs Town Council is working diligently to control growth and will continue to work proactively on this matter.”
Our photographs show otherwise. Taken by vigilant naturalist Alex Nelson they clearly illustrate the priorities of council, which are to create parkland-type areas along some sections of the river banks, and to control growth along the walking and cycle path. Protecting the mature river gums clearly has low to nil priority.
There is also concern now about the large amount of tree debris from the fallen trees. The appearance of the river has been compared to a war zone and the larger trunks and limbs could present a hasard during flood. The Alice News asked whether council is going to remove debris from burnt trees in the river corridors? If so, in what time frame? And is council going to do this with the utmost care to preserve any tree survivors? 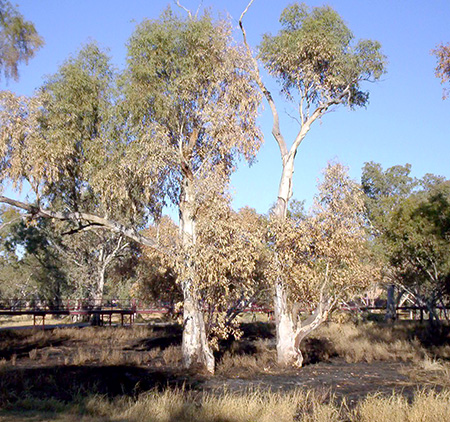 Said Mr Buxton: “All action taken by Council [to date] was in accordance with AAPA advice.  This will continue to be the case for the remaining carcasses.  This has so far been to remove any public safety concern of the tree (if required), but other than that the tree should remain where it lays.”
Pictured: from the top – As we prepared our report  the Town Council was at work in the river, removing sand while seeming to do its best to preserve couch and buffel grass around the base of a mature tree. • Keeping the edges of the walking and cycle path mown takes priority over the protection of trees. As the long grasses hay off, the stand in the distance, surrounded by a  sea of thick grass, will be in danger.  • Dried buffel and couch grass right up to the base of a mature tree, just a stone’s throw from the Civic Centre, whose distinctive roofline can be seen at the left of the photo. This photo was taken in July.  • A clear demonstration of the problem – surrounded by long dry grass these trees were lucky to escape with an early season singeing. Photo taken in July. • Creating the appearance of parkland by mowing couch grass on the eastern bank of the river, while as can be seen in the middle distance, nothing has been done in the riverbed and along the thickly infested western bank. All photos by ALEX NELSON. 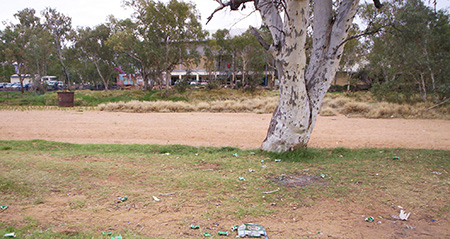