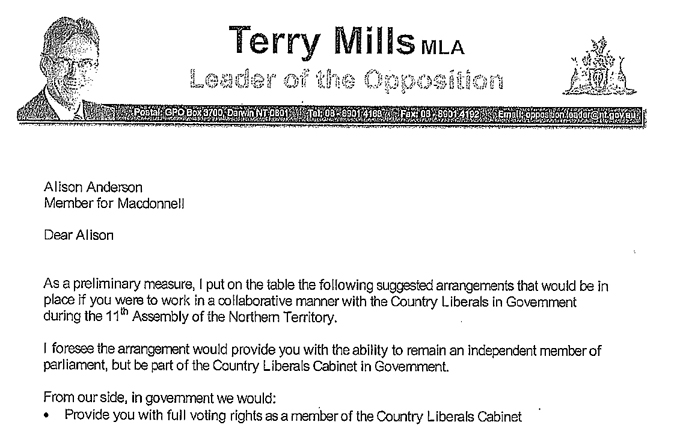 Treasurer Delia Lawrie today contended that a letter written two years ago was proof of a deal last month between Opposition Leader Terry Mills and former Independent Alison Anderson to “lure” her to the Country Liberals.
Ms Anderson says the letter attached to Ms Lawrie’s release is authentic but it dates back to the last election, when the two major parties negotiated vigorously to get the numbers in Parliament.
A media release today from Ms Lawrie quotes Mr Mills as saying (on September 9): “There’s no deal.”
She adds: “Terry Mills has a lot of explaining to do, he needs to come out of hiding.”
Ms Anderson says the Country Liberals’ approach to her was no different to the ALP’s negotiations with Independent Gerry Wood, who made a comprehensive deal for his support of Territory Labor which formed the present minority government.
Ms Anderson says the letter circulated by Ms Lawrie today was extensively reported in the media two years ago.
The former Labor Member became an Independent and recently joined the Country Liberals.
She says Ms Lawrie’s media release is “pure fabrication”.
The Alice Springs News Online has asked Ms Lawrie for a comment and we will post it when it is to hand. – ERWIN CHLANDA