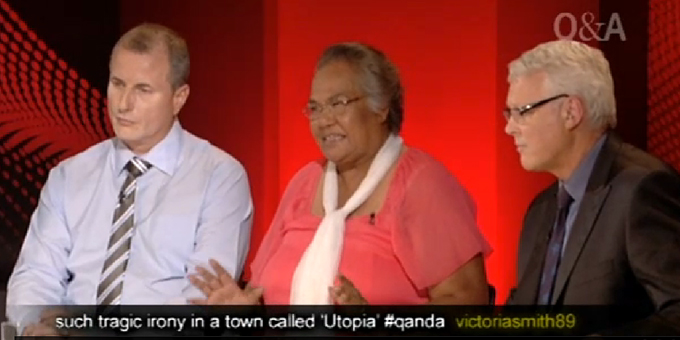 Last night’s Q&A on the ABC was hugely useful for understanding the popular national debate about Aboriginal issues: Its perverse uselessness, to be precise.

Rosalie Kunoth-Monks (pictured) commented on the Federal Intervention, costing millions of dollars, in the wake of the chilling “Little Children are Sacred” report into abuse and neglect. Recalling the arrival of the army, police and bureaucrats in her home town of Utopia, she said governments need to have a “diplomatic relationship” with Aboriginal  people and “not to come out and hunt us like dogs”.

Moderator Tony Jones did not ask for an explanation nor elaboration.

It was a notable addition to Mrs Kunoth-Monks’ vocabulary: last week she accused Australia of “ethnic cleansing”.

Was the Darwin audience outraged? No way. It applauded. Profusely.

The tweets were ecstatic:-

Rosalie Kunoth-Monks was great on #qanda last night. So honoured to hear her speak at our women’s luncheon in Melb last week.

Aboriginal Australia should be allowed to control its own destiny. Protect Aboriginal homelands – simple. Stop the NT intervention.

Close the Gap is failing because mainstream Australia is still consumed by selfishness and greed.

Our country flag should be half mast after Rosalie’s story.

There is something utterly compelling about Rosalie. Love you, Rosie.

White Aussies need to do what we don’t do well … shut up and listen – and pay, that Tweeter could well have added, as the nation is spending $1.7b on Aboriginal housing.

Chief Minister Paul Henderson made a point of that during the show. Did he get applause? Not much.

Mrs Kunoth-Monks made no bones why she had invited Salil Shetty, Secretary-General of Amnesty International, to Utopia: to get global publicity.

Being from India he would understand poverty, opined Mrs Kunoth-Monks.

Has she ever explored how many hundreds of millions of Indians would consider as an extravagant windfall the unearned handouts to  of welfare recipients in Australia, generation after generation? Nope.

Mr Shetty, one of a long list of instant experts on Aboriginal issues, obliged, and so did much of the media which can’t seem to get enough of this stuff.

Mr Henderson said his government provided a “fantastic school, middle and senior, as good as anywhere” to Utopia, but it’s no good for kids who don’t get sent to school, every day. It’s the water and the horse story. Mrs Kunoth-Monks made no comment.

According to the listing in the Federal Government’s MySchool Utopia has a population of 900. Mrs Kunoth-Monks’ estimate was 1200.

Just 95 children were enrolled in the Utopia school in 2010, operating in several communities.

That seems to be an extraordinarily low enrollment. And of that number, only 77% attended, that’s about 75 kids using a $4m school with a budget in 2009 of $3.3m. MySchool puts 92% of the kids into the bottom quarter of socio-economic advantage (ICSEA).

All this brings us to the elephant in the studio: Self-help. Any takers?

Mrs Kunoth-Monks said her people would like to get off the welfare cycle and stand on their own two feet, but she did not give any detail on what this would take.

So let’s repeat the questions we put to Mrs Kunoth-Monks on Monday.

Utopia has had a thriving art industry for a couple of decades.

Where did all that money go? Nearby TiTree is one of The Centre’s most prospective areas for horticulture. It had and still has major vineyards and other plantations.

There is plenty of water and cheap back-loading freight to Adelaide. How many of the unemployed in Ms Kunoth-Monks’ communities have worked or are working in these enterprises, constantly hampered by having to bring in labour from interstate, whilst being surrounded by hundreds on the dole?

How many plantations have been started by Ms Kunoth-Monks and the other local elders?

How many cattle are they running in this prime beef producing area? How many of the men are continuing the proud tradition of Aboriginal stockmen – as workers on surrounding cattle stations, or in their own enterprises, on the vast stretches of land given to them under landrights?

How come Aboriginal-owned cattle stations in Ms Kunoth-Monks’ neighborhood are leased out to white pastoralists?

Where is the citrus plantation that’s been on the drawing board at Utopia for the best part of two decades? Meanwhile Indigenous Affairs Minister Jenny Macklin said in Alice Springs this morning the Aboriginal people want “their kids go to school and get a decent education, having jobs for local people and tackling alcohol abuse are the priority issues for them in building a stronger future.

“People believe parents should be responsible for their children’s regular attendance at school.”