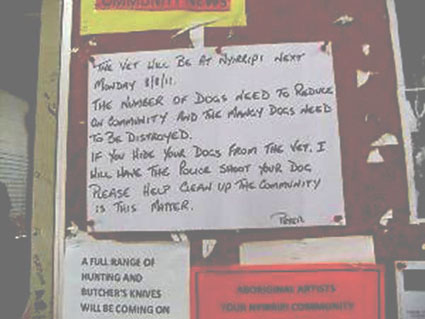 An aggressively worded sign about dog control, posted by a Central Desert Shire officer at the store in the western desert settlement of Nyirripi, has been removed.  The sign included a threat that dogs hidden from the visiting vet would be shot.
Nyirripi has a population of some 320 and is roughly 440 km north-west of Alice Springs, or 150 kms west-southwest of Yuendumu.
CEO of Central Desert Shire, Roydon Roberston, said he became aware of the notice yesterday (Sunday) and “ordered that it be removed”.
He said the notice was placed by the shire officer “in conjunction with senior community members”.
“No authority was given or would have been given by Executive Management as the sign is not in keeping with Council Policy. Further discussions will be held with the staff member involved,” said Mr Robertson.
A vet is in the community today – as advised by the sign – and is expected to attend to 15 dogs today and a total of 30 before leaving tomorrow.
The shire’s Dog Management Policy, adopted in October 2008, stipulates a maximum of two dogs per household.
Mr Robertson says compliance with the policy has been “mixed” across the shire, while reported dog problems have “escalated” at Nyirrpi, becoming “worse than other communities”.
He says the shire council has received numerous complaints from government agencies and council staff concerning dogs, including packs of roaming dogs.
He says the Local Board at Nyirrpi, has been very keen for the vet to again visit. (Local Boards are appointed to advise council on local issues and aspirations.)