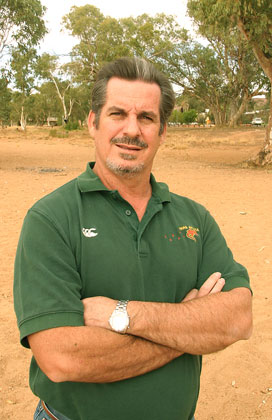 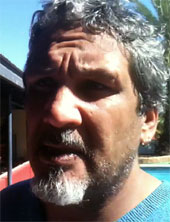 Lhere Artepe member Michael Liddle (at right) has spoken out about what he says is the urgent need to restore order in the Lhere Artepe Aboriginal Corporation (LAAC).
He says there is an unacceptable lack of transparency in Lhere Artepe Enterprises Pty Ltd (LAE), a commercial offshoot, whose “heart and soul” is the Lhere Artepe Aboriginal Corporation itself. He raises questions about Darryl Pearce (at left), LAAC’s administrative head.
“Who is running the corporation now? How did Darryl Pearce get from the corporation to LAE and who made that decision?
“LAAC should be for all Central Arrernte people in Alice Springs,” says Mr Liddle.
“I have no financial interest in the Lhere Artepe Aboriginal Corporation nor Lhere Artepe Enterprises Pty Ltd.”
He says members find it difficult to even get in touch with the organisation set up to represent them.
“When people ring the office they get no answer. When they go there the doors are locked.
“Lhere Artepe has lost its credibility because of one family group’s failure and ignorance to recognize other stakeholders within the corporation.”
Meanwhile, email correspondence between Mr Pearce and the vendors of company shares, a deal worth hundreds of thousands of dollars, are circulating in the town. The Alice Springs News has seen a copy of that email, which indicates that the deal was mired in acrimony. In the email Mr Pearce expresses himself in intemperate language, although from what he writes he has also been on the receiving end of some.
Mr Liddle, when asked by the Alice Springs News to comment about the email, said: “This implicates a lot of people.
“My interest is not with LAE but with the corporation itself.
“The issues with LAE will sort themselves out later.”
The News sent Mr Pearce an earlier draft of this report, quoting from the email and offering right of reply. We heard back from his lawyer.
The lawyer told us the proposed article “contains confidential correspondence, publication of which would constitute a breach of commercial confidence between the parties referred to therein” and that “Mr Pearce reserves his rights to institute proceedings against you” should we publish the article.
Meanwhile a source within LAE says the company has made purchasing decisions worth millions of dollars without informing directors of the company.
LAE are developers of residential land in the Mt Johns Valley.
This source declines to be named.