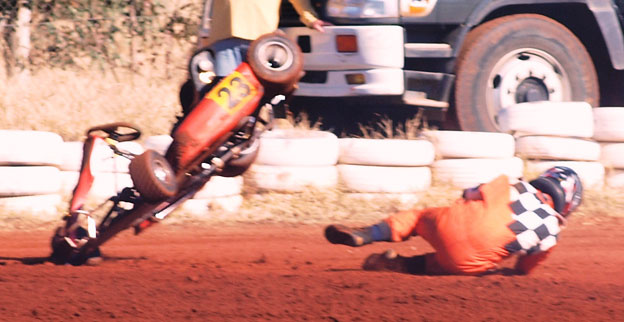 Photos and story by PATRICK NELSON

Now that the dust has settled from the NT Karting titles, won by long-time Central Australian motor sports identity Tony Connor in the Statesman Class, the Dirt Kart fraternity is gearing up for the Alice Springs titles on September 18.
Club President Gary Burns says several new drivers were planning to come out and have a go this weekend.
“The NT titles have created some excitement and energy so we’re expecting to see some new faces at the track,” he said.
In the NT titles Connor scored 116 points from his eight heats to edge out Port Pirie’s Dale Afford by one point.
Connor also did well in the 200cc Open class and would have finished among the placings but for some bad luck in the final heat of the day.
He was in second place and within a gasp of the chequered flag when both his motors blew up.
He had just enough momentum to limp over the finish line but not before half the field whizzed past relegating Connor to sixth.
About 120 drivers, including large contingents from South Australia and Western Australia, contested 10 classes over the three-day championship, which was named in honour of motor sports icon Brian Joy.
South Australia took the honours winning eight classes with WA and the NT one each.
Jarred Moore of Adelaide had an outstanding weekend winning the 100cc Open, 125cc Heavy and KT Medium classes. He nearly won a fourth class but for Australian No 1 and fellow South Australian Mark Burford who prevailed in the 125 Heavy class.
Results:
Rookies (demonstration only): Zach Wilson and James Taylor.
Junior Light: Keaton Szach, Aaron Chalmers, Nathan Chalmers.
100 Open: Jarrod Moore, Ben Stone, Bryden Chalmers.
Junior Heavy: Joe Chalmers, Jared Bevan, Louis Bull.
125 Heavy: Jarrod Moore, Mark Burford, Mat Clark.
KT Light: Jake Tranter, Teagan Tranter, Ben Stone.
KT Medium: Jarrod Moore, Joel Ettridge, Ryan Afford.
KT Heavy: Shane Howard, Neil Morrell, Jordi Little.
Statesman: Tony Connor, Dale Afford, Craig Schier.
125 Light: Ben Stone, Jake Tranter, Lockie Cates.
200 Open: Ben Brown, Rebecca Rawlings, Adrian Haywood.