A 30-year-old man who indecently assaulted a woman in a car park in Alice Springs yesterday has been arrested and charged, according to police.

Just after 11:30am a woman was walking in the Gregory Terrace car park when she was approached by a man who is alleged to have indecently assaulted her. The woman punched the man twice to the face, causing him to run from the scene.

Provided with an excellent description of the man, police were able to utilise CCTV systems to follow the offender who then got into a taxi and left the area.

The man was located and arrested at a Sadadeen address and taken to the Alice Springs Watch House where he was charged with one count of Commit an Act of Gross Indecency. He was remanded in custody and is scheduled to appear before the Alice Springs Local Court today. 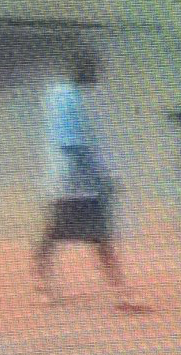 She told him to leave and he was last seen walking towards the Todd River.

No one was injured during this incident, police say.

They describe the man as being of Aboriginal in appearance, 176cm tall, with a bald head, solid build and missing a front tooth.

At the time of the incident the man was wearing running shoes, brown cargo knee length shorts with a grey shirt. Image from the police of a man they wish to speak to.

At about 1:30am a resident in Hawkins Court woke up to discover three unknown offenders in the lounge room on his home. It is alleged one of the offenders ran at the victim and struck him to the head with a glass bottle before the trio fled the scene.

The victim, a 20-year-old man, suffered a laceration and bruising to the head and went to the hospital for treatment.

Two police officers from Darwin Command have been charged with drug offences.

A 28-year-old woman has been charged with possessing Schedule 1 and 2 drug less than traffickable quantity. She has been granted bail and will appear in court on October 13.

The two officers have been suspended without pay.

Sir – As a former Alice Springs resident of 17 years [and former sports writer for the Alice Springs News] my love of writing has never dwindled.

With the inspiration of my lady, Denise, whom I married three years after my first wife, Jenny, died, I began rewriting a science fiction novel I started in 2002.

Living in a remote area of the United States of America, Denise observed I needed to do something with my spare time.  Hemmed in by ice and snow, she suggested I complete the novel I told her about previously.  De was working as a Registered Nurse, so her time was fully occupied.

Writing under the nom de plume, Cutcliffe King, it is a mixture of history, mystery and science fiction. Books two and three will follow.

Book one, The Recruitment, is set mainly in the south western former whaling town of Albany, in Western Australia.

Now the big question is: “Will I make my fortune as a novelist?”

To be quite honest, the publishing companies and the distributors – Amazon, Barnes & Noble, Google, Apple – are the big winners.  Fortunately for me, I bought 100+ books that I have signed and sold in various towns!  This has provided some comfort, knowing my work is being read.

A 23-year-old New South Wales man entered the NT on foot after being told by police at the Kulgera crossing he would need to undergo two weeks’ quarantine, and after driving back into SA and abandoning his vehicle about two kilometres to the south.

Late yesterday the man was located and arrested in Yulara to where police suspect he had been hitchhiking.

The man was issued a notice to appear in court for contravention of an emergency declaration.

The current two-hour closure of the library from 1-3pm each day, ostensibly for “Spring cleaning”, is expected to end with the start of the school holiday program, at the end of this month.

At the same time the library is expected to again welcome all-comers. This follows months of a ban on unaccompanied youth 15 years and under, which has been the subject of debate in the community.

Two men will appear before the Alice Springs Local Court charged in relation to the serious assault of a man in Alice Springs earlier this month.

On September 4 the men, aged 29 and 34 are alleged to have seriously assaulted a 43-year-old man.

He was found in the driveway of an East Side and taken to the hospital where he received treatment for life threatening injuries.

Meanwhile four people who drove around the Alice Springs CBD in a reckless manner in a stolen motor vehicle at the weekend have been arrested.

One of the offenders who attempted to flee was tasered after he allegedly ran at an officer armed with an edged weapon. He was arrested and later taken to the hospital for treatment.

Another alleged offender who struck an officer in the face, was arrested at the scene and two others following a foot chase by police.

A 19-year-old man will appear before the Alice Springs Local Court today charged with unlawful use of a motor vehicle and stealing.

A 16-year-old male has been charged with one count each of unlawful use of a motor vehicle and being armed with an offensive weapon and will be dealt with under the Youth Justice Act.

A 17-year-old male has been charged with unlawful use of a motor vehicle and assaulting police and will be dealt with under the Youth Justice Act.

A 16-year-old male has been charged with one count of unlawful use of a motor vehicle and will be dealt with under the Youth Justice Act.

Around 10:20pm yesterday two women were walking in the area of Ross Park Oval when they were approached by a male. He allegedly assaulted one of the women before leaving the scene.

He is described as a light-skinned Caucasian in his thirties, about 179 centimetres tall, solid build, with brown hair. He was wearing dark shorts, possibly denim, a dark t-shirt and thongs. Police report.