Distinction of design reflecting a sense of place 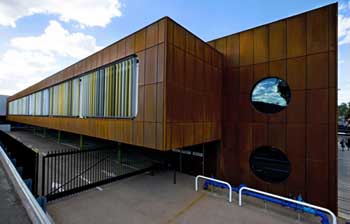 No other single entity has put its stamp on the contemporary face of the Alice Springs town centre to the same extent. With the redevelopment of the northern Todd Mall and Parsons Street and the construction of the Green Well Building on Bath Street, the design work of architects Susan Dugdale and Associates has raised the bar of the built environment across key sites from east to west, reflecting a commitment to the idea that “Alice Springs is a special place”. By KIERAN FINNANE.

Make yourself at home: that's the message to the public in Melbourne's Federation Square, with deckchairs provided so you can chase the sun, or cushions to make sitting on the stairs more comfortable. Is there a lesson here for Alice?

Most of the services located underground in Todd Mall have now been identified and August is the expected start date for the first stage of redevelopment works.

These will focus on Parsons Street – widening the southern footpath, resurfacing the footpaths and road, redoing the stormwater drainage which will feed a water feature, introducing trees.

Pedestrian areas will not be affected in the lead-up to Christmas, with the works stopping short of the bandstand.

The sails and bandstand will be removed starting mid-January 2013, and roadworks will continue, creating the bend that will ultimately connect with the road into the northern end of the mall from Wills Terrace. At this stage public art and shade structures, the design of which has not yet been completed, will also begin to be installed.

Roadworks at the north end are planned to start in mid-February 2013.

Meanwhile, Alice Springs will pass through another tourist season and head into another summer. Is there something to do other than wait?

Pictured above: A former newstand converted into a coffee stall, adding to the liveliness and appeal of Swanston Street in Melbourne. Could council call for expressions of interest in running something like this after hours in the mall, when  the cafes close?