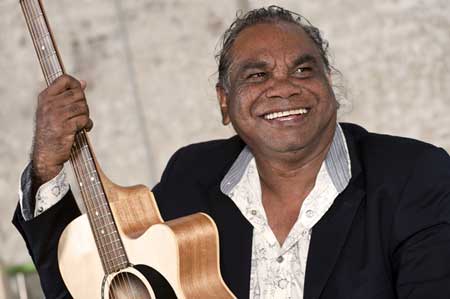 Warren H Williams – singer, musician and song writer from Hermannsburg in Central Australia – has won the $50,000 Red Ochre Award for his outstanding contribution to Indigenous arts. This is Australia’s highest peer-assessed award for an Indigenous artist presented by The Australia Council’s Aboriginal and Torres Strait Islander Arts Board.

The award was made today at the 5th National Indigenous Arts Awards, held at the Sydney Opera House.

While known widely as a country musician, Warren H brings together many threads of the contemporary Australian sound, merging Aboriginal music with country and rock, bringing these musical genres onto a world stage.

“Warren plays a vital and unique role in the Australian music industry,” says Lee-Ann Buckskin, who was appointed Chair of the Australia Council ATSIA Board this week. “He’s a quiet achiever who not only shows young people the way to have a successful career in the music industry, but also dedicates his energy to issues of health, Aboriginal rights and the environment."