Give Alice a thought over the holiday season

It’s that time of the year when the Alice Springs News Online, over Christmas and New Year, brings you opinion pieces from locals from all walks of life, reflections on all that’s good (and not so good) in our region.

LETTER: Mandatory rehabilitation bill must be released for public consultation

The NT Government to release its mandatory rehabilitation legislation for public consultation prior to the next Parliamentary sittings in mid-May, writes Priscilla Collins, CEO of the Aboriginal Peak Organisations NT. 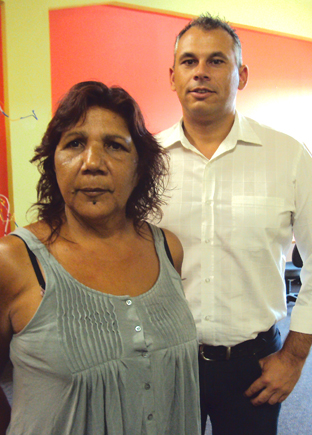 MacDonnell MLA Alison Anderson says the failure of the super shires,
fixing the "appalling" SIHIP housing program, reforming  "pretend"
education and training and creating meaningful economic development
strategies in the bush will be among her main objectives.

Ms Anderson, who started her parliamentary career as a Labor Party
member and became an Independent in 2009, last night joined the Country
Liberals. This puts the numbers in the House at 12 – 12, with Gerry Wood
holding the balance of power.

She says there have been "no deals whatsoever" to entice her into the conservative party, such as the offer of a ministry.

Ms Anderson says: "The shires are a mess. They are too top heavy, too
much money goes into the hierarchy while services on the ground are
limited."

She says repairs and maintenance to bush homes carried out under
SIHIP is "absolutely appalling. She's had complaints from communities
including Santa Teresa, Haasts Bluff, Papunya and Docker River.

"Repair crews were meant to have come back in June but still haven't.
The money goes to consultancies and layers upon layers of bureaucracy."

Ms Anderson says the "separatism" in education must stop. She says
even as a Labor Member she had admired the education policies of
Opposition Leader Terry Mills.

"There should be one set of policies, not a pretend education and
training system in the bush. We've got training for the sake of
training. Some people have 20 or 30 certificates [but no opportunity of
using them]."

She says the economic development efforts of the Government are a sham.

Consultation consists of getting wish lists from people, so the Government can tick boxes, but there's seldom any follow-up.

The growth towns – Hermannsburg and Papunya in her electorate – are concepts without substance.

People aren't necessarily happy to have a central service hub,
although Ms Anderson concedes that she was the Labor Minister introducing the hub and spokes model of the growth towns.

She says there should be specific commercial proposals based on
research of the available assets, markets and the preferences of the
locals. She says Hermannsburg has some obvious opportunities  –
tourism attracted by the town's history, Palm Valley nearby, and the
proximity to Alice Springs.

The options for Papunya are not as clear, and "we will do a proper
talking session [about] where we want to go". A cultural museum and a
visitor complex at the back of ranges near the town may be some options.

Have the Country Liberals done that sort of planning in the past, so as to have a strategy in place?

No, says Ms Anderson, but a start on focussed economic planning will begin this year.

Ms Anderson is pictured with MLA for Braitling Adam Giles.

Meanwhile Mr Mills says Ms Anderson’s decision to join the Country
Liberals "is simply reflecting the wishes of the people of MacDonnell,
who’ve told her they want to get rid of Labor”.

Ms Anderson’s application will be discussed at a branch meeting in Alice Springs tonight.

[See "full story" for comment from the Leader of Government Business, Chris Burns.]