Perhaps it's because of his shadow portfolios – Indigenous Policy, Transport and Construction, Regional Development – that the Country Liberals' Adam Giles takes a regional view of issues affecting his electorate. "I'm pro-development, we've got to grow the economy, create jobs for the future," says the sitting Member for Braitling. But he links the old conservative mantra with a certain logic to the specific ills of the region.

He recognises the social issues that are the preoccupation of many – "especially our outrageous law and order issues" – but, beyond what is already being done in a raft of programs and measures, he believes they "won't be fixed until the economy is fixed".

"When we have more people in more jobs then we will see some of our social issues subside. With greater participation in the economy, more kids will go to school, people will be healthier, the imprisonment rates will drop, and social issues will have less relevance and impact," he says. 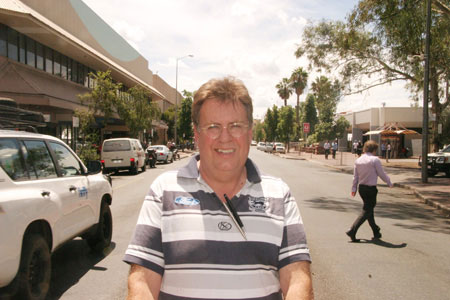 Risk of a 'lame duck' mayor, he warns

"There is a risk in this election of seeing a 'lame duck' mayor," says candidate for councillor Vince Jeisman. He strongly supports the incumbent Damien Ryan but says it's clear that the field is divided behind Mayor Ryan and Alderman Eli Melky as the lead contender amongst his four challengers.

Whoever wins the mayoral contest will be looking keenly at who takes the fourth and fifth positions in the councillor ballot, says Mr Jeisman, to see whether the "strong lobby from the right" or "the middle to leftist" candidates will have the majority.

Mr Jeisman, a Labor Party member and electorate officer for Labor MHR Warren Snowdon, obviously counts himself in the latter camp. He says he will be happy with whatever way the cards fall.

"The community will make up its mind on polling day and we all have to live with that decision.

"If I'm elected, I will bring my Labor values to the debate but once a decision of council is made I will be bound by it."

He sums up his Labor values as a belief in social justice, equity and striving for a balance between freedoms and equality: "In our decisions how do we include everyone in the community without becoming too burdensome on some?"

Applying this to the issue on everyone's lips – law and order – he says the causes, not the symptoms have to be treated. Unless we do that, it's like filling a swimming pool with a hole in the bottom. That's what we would be doing if we only brought in more police and youth programs, say, and didn't do something about grog. KIERAN FINNANE reports.