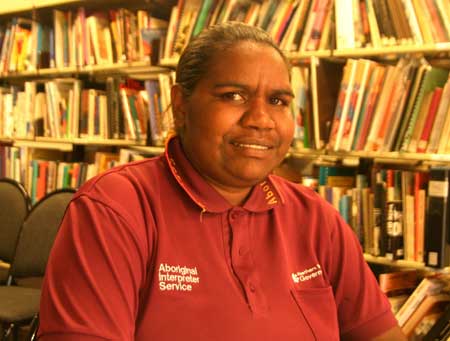 I first met Sharona Richardson (pictured) in 2007 when she and another young local woman were staffing the Centrelink agency at Tjuwanpa Outstation Resource Centre, just outside Hermannsburg where she's from. I couldn't help but notice her again when she stood up at IAD's First Friday series of presentations and confidently spoke about the interpreters' code of ethics, emphasising the professionalism of Aboriginal Interpreter Services for whom she's working now.

Back in 2007 I'd been struck by her initiative – a feature of her working life was that at one stage she had gone off to work in a tuna factory in Port Lincoln. And at the time, with the encouragement of the local police sergeant, she was considering taking a job as an ACPO (Aboriginal Community Police Officer).

She told me on Friday that she did begin the training but a five-year-old incident that had given her a record prevented her going further with it. Meantime the shires had been established and their night patrol programs were underway.

"The sergeant looked at me again," she said. She became team leader for night patrol at Hermannsburg, staying in the position for a year.

She left because she was expecting a baby. A healthy boy arrived in August 2009 and she called him Mathias.

"I thought, 'I've got a baby, now I need a job'," she recalls. She had already done six months' training as an interpreter at IAD (Institute of Aboriginal Development). She heard that Aboriginal Interpreter Services had vacancies and they took her on as a casual. Then a full-time permanent position came up as a community-based interpreter. She's being supported to finish her studies on two days of the week. For the other three she's on call to attend wherever interpreter services are needed. KIERAN FINNANE reports.