The Giles government hanging by a thread and the town being far from assertive, northern development is off to a hesitant start. ERWIN CHLANDA reports. PHOTO: Alice Mayor Damien Ryan (left) and Chief Minister Adam Giles at Friday's information session in Alice Springs. 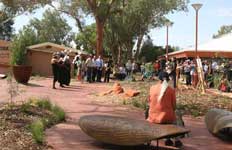 A stance on proposed changes to racial vilification laws, approving $25,000 for a master plan for public arts such as the Gathering Garden (pictured) and Cr Melky being coy about a motion of confidence in the Mayor – all in a night's work for the town council. ERWIN CHLANDA reports.

The Alice Springs Town Council's elected members are split about whether the public should have access to statements by them and their senior staff about "pecuniary and other interests". ERWIN CHLANDA reports

Ryan earning more from govt. jobs than for being Mayor

It appears Damien Ryan is making more money from serving on government boards than he is paid to be the Mayor of Alice Springs. ERWIN CHLANDA reports.

Does Mayor Damien Ryan have conflicts of interests with the large number of positions he holds outside of his Town Council position? Do these jobs take up too much time, detracting from his mayoral duties for which he earns $100,000 a year? And do the fees he gets for these outside positions create obligations for him that may not be in the interest of the town and the ratepayer?ERWIN CHLANDA reports.

Electricity cost still up in the air, cuts by Feds a worry for council

No CPI increase "leaving a hole in our budget for the next three years," says Mayor Ryan.

ABOVE: Room half full or half empty – the small turn-out for the mayoral Q&A suggests the town's flagging interest in all the talk. A few more than shown did arrive. Councillor candidate Matthew Campbell in the front row is not sleeping – in fact he was the first to arrive – we just caught him during a blink.  BELOW RIGHT: Mayor Ryan and challengers (from left) Steve Brown, Eli Melky, Samih Habib Bitar, Dave Douglas.

Alice seems to be getting sick of talking. Last night's mayoral candidate question & answer session was a lacklustre affair and poorly attended. If candidates' family and friends, councillor candidates and media had been removed, the Andy McNeill Room would have been three-quarters empty.

The five candidates outlined their campaign message with no surprises. Steve Brown, candidate for mayor and councillor, was the one to come closest to making an speech intended to inspire, nominating the town's biggest single issue as "social inclusion" – a term usually coming from those who would count themselves as his opponents .

To offer residents of remote communities and town camps a way into our community is the "burning issue" for Alice Springs, he said.

Mayor Damien Ryan in his five minutes said creating community events makes the community more "inclusive", and that council is not given enough credit for its program of events. In its next term council should work on having more, he said. In collaboration with Indigenous elders they could include a biennial desert festival, which could be taken to world tourism markets.

The biggest round of applause  for the night was reserved for Kate McMasters, a teacher and 5th generation Territorian, speaking from the floor. She said teachers must deal with negative behaviour in the classroom quickly and firmly, but their focus remains on positive behaviour, building it up with endless feedback. She urged candidates in tackling the issues to start with positive as "it's poisonous out there at the moment". KIERAN FINNANE reports on the mayoral candidates' Q & A.

Unseating an incumbent: not easy but not impossible

Mayor of Alice Springs Damien Ryan has only served one term and has time on his side for a return to office in the March elections. Only once in the 41 year history of the Alice Springs Town Council has an incumbent mayor been defeated. That was in 1992 when the former Assistant Commissioner of the NT Police Andy McNeill unseated Mayor Leslie Oldfield, who had campaigned on her impressive track record but offered no new policies. This unique event is analysed for the lessons it may have for the current mayoral contest by long-time observer of Alice Springs and NT politics, ALEX NELSON.