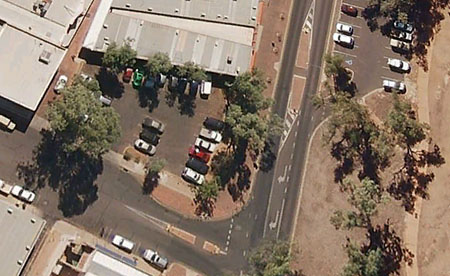 The Town Council has supported Alderman Jane Clark in her request for a report from officers on establishing a tree register, with pruning or removal of significant trees being subject to council approval. Ald Clark put her motion to council after contact from constituents expressing their concern over the destruction of mature trees in the ANZ carpark last weekend.
Steve Thorne, Chair of Northern Territory Urban Design Advisory Council,
who headed up the consultant team on the revitalisation of the Alice Springs CBD, has also suggested the establishment of a tree register, as part of an effort to halt the "death by a thousand cuts" that is occurring in our town centre.

Says Mr Thorne: "The slow removal of quality buildings and trees in the public realm in Alice Springs has previously been described as 'death by a thousand cuts'.  This refers not only to the removal of good things to look at and experience, but to the economic consequences as Alice becomes less attractive in the broadest sense.
"For these reasons alone it may be time for the community to record those places and objects which give Alice Springs its character.  I feel that a survey should be undertaken and the significant trees in Alice should be mapped, photographed and registered."

Meanwhile, Ald Murray Stewart has proposed the formation of a "taskforce" to boost business confidence. Business needs "a shot in the arm" and it needs to happen as soon as possible, he said, but nobody mentioned the $5m 'shot in the arm' that council is sitting on until the middle of next year – the revitalisation projects. KIERAN FINNANE reports.