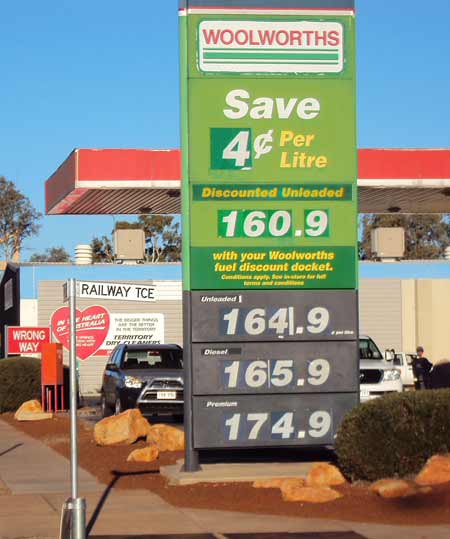 When it comes to the exorbitant fuel prices in Central Australia it's not about the bottom line but about the top line – namely the yellow one in the two graphs above.
It shows what you are paying at the pump compared to the Terminal Gate Price (TGP, mauve line) and the Singapore Parity price (blue line).
And the gap is what the dealers are pocketing.
In the last three months that margin grew massively: the TGP dropped significantly but the dealers hardly adjusted their prices, so that the margin, per liter, is now around 40c.
That's around five times the average around Australia. ERWIN CHLANDA reports.

While he was "really impressed" with the many "community harmony" initiatives taken in Port Augusta, and with their apparent success reflected in the town's general appearance and atmosphere, the consultant reporting back to the Alice Springs Town Council was at pains to point out the "very significant" differences between the two towns.

Alice has twice the population, said Craig Wilson of Craig Wilson Consultancy, formerly an employee of the Alice council, now based in Mt Gambier.

Port Augusta has only one Aboriginal community on its periphery, Davenport, in contrast to Alice's 18 town camps.

Around 1300 people from outlying areas use Port Augusta as their regional hub, as opposed to the 11,000 to 12,000 for whom Alice is the regional centre, said Mr Wilson.

Key among the initiatives have been the Port Augusta Aboriginal Community Engagement Group and the City Safe Program. The engagement group's enquiries into budgets and outcomes of various government departments and agencies were initially seen as "threatening" but are now well accepted. City Safe is in the hands of a private contractor whose personal qualities seem to account for a good deal of his success. KIERAN FINNANE reports.