This page provides links to past books and arts news and reviews published in the Alice Springs News in 2020, starting with the most recent. 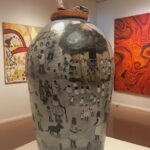 “The instantly recognisable white-washed facade of the small church in the historic precinct is there, as it is in many images by Stockley, but in Inkamala’s work it stands less for the colonisers’ claim and more for the Western Aranda’s counterclaim, the way they have made that history their own, absorbed those introduced spiritual practices and narratives and vitalised them in their own language and guise,” writes Kieran Finnane.

“New NT Minister for Arts, Culture and Heritage Chansey Paech takes a dynamic view of culture, that it is for the making, that our identities as Central Australians or Territorians are not fixed but rather fields for action, where the effect will be on the sense of who we are collectively,” reports Kieran Finnane.

A painter’s painter turns her eye on Hermannsburg

“Stockley, one of the Centre’s best known non-Indigenous artists, with a national profile, is a painter’s painter. Her primary interest in this show – and long-standing – is in ways of seeing, but her rigorous attention also distills something important about what the Hermannsburg Precinct represents,” writes Kieran Finnane.

Near and far, impending and uplifting

“These were my thoughts on a first tour of Suzi Lyon’s haunting exhibition, Travels on a distant star, showing at Watch This Space. I say ‘haunting’ because it has stayed with me, sweeping me up in its elegiac mood and ponderings at a vast scale,” writes Kieran Finnane. 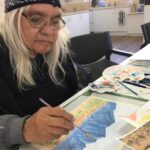 It was a case of watch and emulate: two of the top painters from the ‘Hermannsburg School’, working in the tradition of Australia’s most famed watercolour landscape painter, Albert Namatjira, were leading a masterclass. Kieran Finnane reports.

The Peace Pilgrims were breaching the “spooky silence that often prevails around Pine Gap,” whose purpose the author advocates “should be out in the open,” offering for public discussion the role it “plays in lethal, illegal drone strikes against citizens of countries with whom Australia is not at war, and the human consequences of this lawlessness.” Erwin Chlanda reports on the launch of Kieran Finnane’s book, Peace Crimes: Pine Gap, national security and dissent. 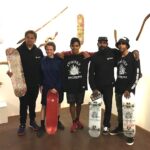 Sport, food, entertainment, art, business, black, white, music, IT, drink, people with a spread of backgrounds, trade – all in one place? If you weren’t at Watch this Space last night you missed it: Alice Springs at its best. Erwin Chlanda reports.

In this video film-maker John Hughes interviews Kieran Finnane about why she wrote Peace Crimes as part of a film he is making about the life and work of the late Desmond Ball, the foremost civilian expert on matters Pine Gap until his death in 2016. The film is called Twilight Time: Desmond Ball: the man who saved the world. The interview takes place at one of the locations on the edge of our town from where you can see the base. The video was compiled and edited by Fiona Walsh. It is embedded in the story. 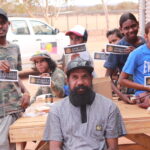 “I guess it’s not just a typical skate-board brand. This is about culture, country and lifestyle.” Kieran Finnane interviews Nicky Hayes on the creation of the Spinifex Skateboards brand, an enterprise in his home community of Ltyentye Apurte (Santa Teresa).

Acting on street name changes and on new public works commemorating Aboriginal heritage and history – why does change matter? And if it doesn’t happen now, then when? Kieran Finnane interviews Joel Liddle Perrurle, one of three authors of a recent article calling for a public commemoration of “unsung Arrernte heroes” in response to the statue of explorer John McDouall Stuart, erected by the Town Council, after protracted controversy and delays, in Stuart Park.

A room, a river, an island, a view 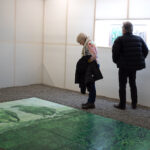 “If it’s an island though it will soon be swallowed in its own inundation – a roiling sea of green, a tsunami, ridden by two vultures, seemingly absorbed in conversation. Will they at any moment realise their impossible position and take off?” Kieran Finnane reviews Gabriel Curtin’s show, A river and a voice shouting above it.

Tangentyere Design won the Indigenous Community Architecture Award for the Women’s Safety Services of Central Australia Shelter. Many locals driving past the Telegraph Terrace site would have noticed the facade for its points of colour in the brickwork and the perforated metal screen adapted from an artwork by a former resident of the shelter.

Attuning readers to the tears of others

“Dani Powell’s debut novel, which digs deep into matters of grief, comes to our attention as waves of mass grief sweep around the planet.” Kieran Finnane reviews Return to Dust (UWAP, 2020).

Even more CCTV and lighting in central Alice Springs but also street trees and shade structures are features of the NT Government’s design concepts, released today. 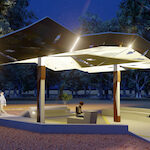 “At the eleventh hour, the public will finally see the designs for work intended to “revitalise” the CBD. So-called public consultation was conducted in 2017. I say so-called, because without the ability to influence the final outcome – which meaningfully would involve some feedback on the actual designs – the process undertaken needs another name.” Analysis by Kieran Finnane.

The Country Liberal Party’s announcement that it will build a national Aboriginal art gallery at the Desert Park might appease those townspeople who are opposed to losing Anzac Oval but it does not overcome the project’s most significant obstacle to date: obtaining the backing of local Aboriginal people. Kieran Finnane speaks to the candidates.

‘What we see in our Country’: Yarrenyty Arltere 20 years on 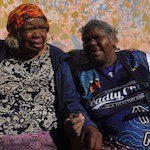 “As the coronavirus crisis broke upon us, the art centre was closed and the exhibition postponed until next year. It would have shown where this valiant group of artists on the Larapinta Valley / Yarrenyty Arltere Town Camp have come from.” Kieran Finnane speaks to some of the artists who are continuing to produce new work.

“Front bencher Dale Wakefield says a letter of support from the native title organisation Lhere Artepe is giving the NT Government the mandate to build the national Aboriginal art gallery in the Anzac precinct, even if it needs to compulsorily acquire the rugby oval from the Town Council.” Erwin Chlanda interviews the Minister. 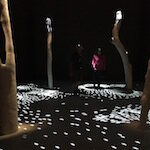 “Another perspective also weighed on my mind, that of the raging country-wide bushfire crisis that has dominated this summer.  In this context Tarnanthi and its artists offer a journey for mind and eye into hope,” writes Kieran Finnane.

“It makes sense that Shilton was working with men in the prison in Alice Springs at the time, immersed in their stories. Not because this book is about these particular men or their stories whatsoever but perhaps because of what immersion in a particular place might agitate in the unconscious.” Dani Powell reviews Leni Shilton’s Malcolm: a story in verse.