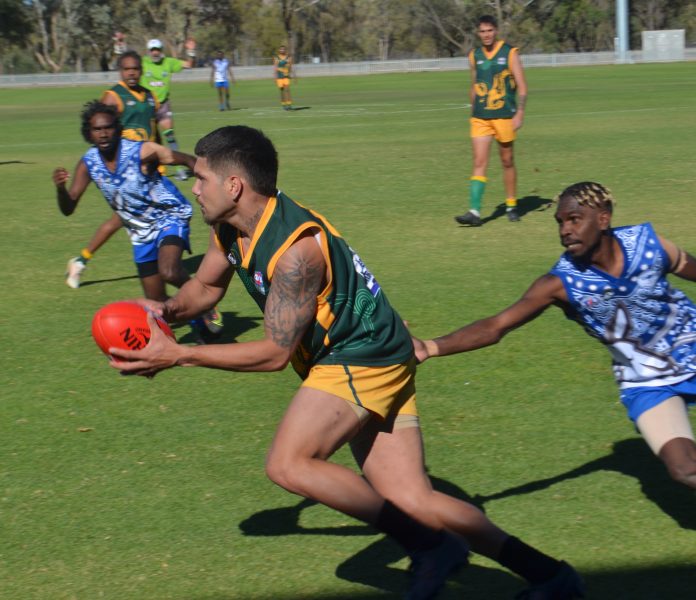 South Alice looked like a chance to bag their first win of the season early in their round five clash against the Pioneer Eagles, but fell away after half time and ended up going down by 55 points.

Both sides applied strong pressure without the ball in the first quarter, with hard tackles and very little open play. Pioneer had most of the ball but struggled to convert, while South were good at finding the scoreboard when they had it, going into the first break five points down.

South took control early in the second, maintaining their tackling pressure and bringing scores level at 20 apiece halfway through the quarter.

But the Eagles mids were able to find another gear, and lock the ball in their forward end.

A big contested mark and goal to Marcus Hamilton got the ball rolling, which was filled up by two consecutive goals from Eric Williams to stretch the lead out to 18 points.

Richard Dixon and quick winger Keithan Watson showed some class for South in the midfield, but did not have the support they needed to take on the Pioneer on ballers, who by half time had stretched the margin to 30 points.

Small bodied defender Tyrell Woodbury hit his straps by the third, consistently cutting off any forays forward made by South, and slingshotting it back up the ground into attack.

Cheyne Miles towered over his ruck opponent from South, and started really using his advantage to his midfielders’ benefit in the second half, with Pioneer scoring regularly from the centre bounce especially.

The Eagles midfielders were kicking effectively in the third quarter, picking holes in the south defence, which had dropped off in pressure as the game slipped away.

The Pioneer forward did not do so well with the boot in the third, missing plenty of shots at goal from long distances, when there were much safer options closer to home if they’d been looking.

Not that South were pressing them on the scoreboard, having been unable to put on a goal since the second.

After the final break, South pulled two goals together early as the Pioneer defence dropped away.

But three consecutive goals in about two minutes from Timmy Pepperill, to the delight of his coaches, well and truly put the game to bed.