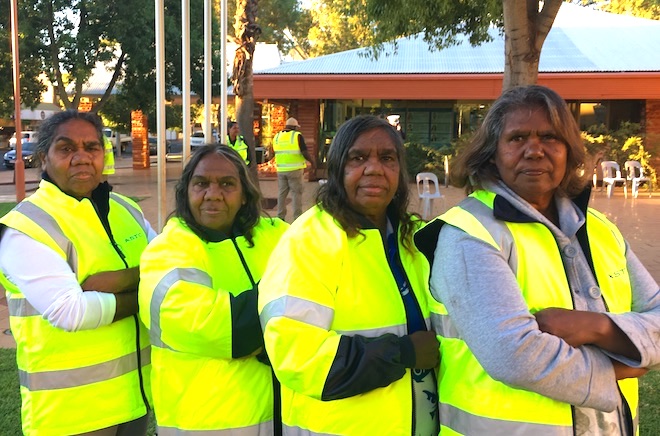 The Arrernte Strong Grandmothers’ group have added their clout to those walking Alice Springs central streets at night, trying to engage with young people.

Inspired by the grandmothers’ group in Tennant Creek, where the women visited recently, it’s about “letting the kids know we’re out now – you can’t muck around!”, said Alison Furber. (She is pictured above, at right in the photo, with from left, Margaret Lynch, Pamela Lynch and Veronica Lynch.)

“And we’re feeling for the kids,” said Veronica Lynch. The grandmothers know their families, their background.

Their work would be about love as well as discipline: “We understand what you’re going through, we care,” said Ms Furber.

The grandmothers, all volunteers, will join forces with the Town Council’s Traditional Owner “foot patrol”, as it has become known, as well as Tangentyere’s night patrol which was relaunching last night.

A briefing was held with police and council officers inside the Andy McNeill Room, while outside a barbecue was set up. Before the grandmothers emerged in their hi vis vests, kids were already being drawn by the signs of imminent sausages. “Is it free?” “Is it soon?”

A few hours later, after the open council meeting had finished, quite a crowd was milling around the area, adults and kids, along with a couple of police officers, and the patrollers.

In the chamber, Councillor Marli Banks asked for precision about when Elected Members would receive a report back on the work being done by the TO’s foot patrol, employed by council.

Not till June, was the answer, dictated partly by council’s new meeting structure, whereby its various directorates report in a 12 week cycle. 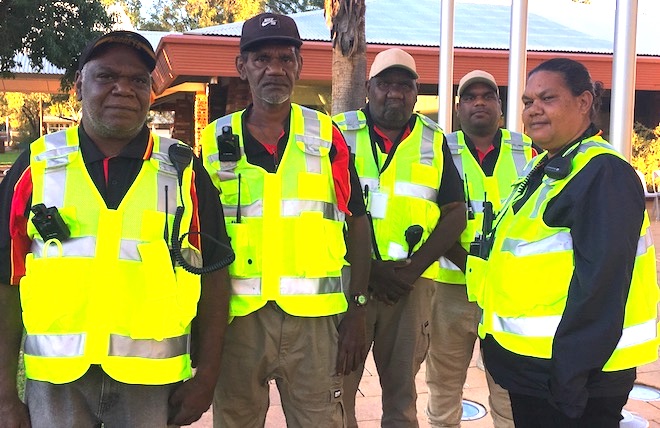 Meanwhile, another youth-related initiative is creeping slowly forward. After discussions that began in late 2019, the NT Government has now agreed to lease the old premises of Tourism Central Australia to council, which hopes to develop it as a “youth programs hub”.

The vacant building, situated on the Civic Centre block,  has significantly deteriorated but the structure is still sound. Repairs and fitout are expected to cost around $300,000.

Apart from youth programs, the “centrally located building for nil rental” could also be used for other community purposes. The officers’ report mentioned the front entrance and reception area being offered to organisations hosting events, such as the Masters Games and Parrtjima.

Note: An earlier version of this story contained reporting about plans to reinvent the Alice Plaza and attempts to involve the Town Council. That is now the subject of a separate report, Council dithers over Alice Plaza’s $50 plans