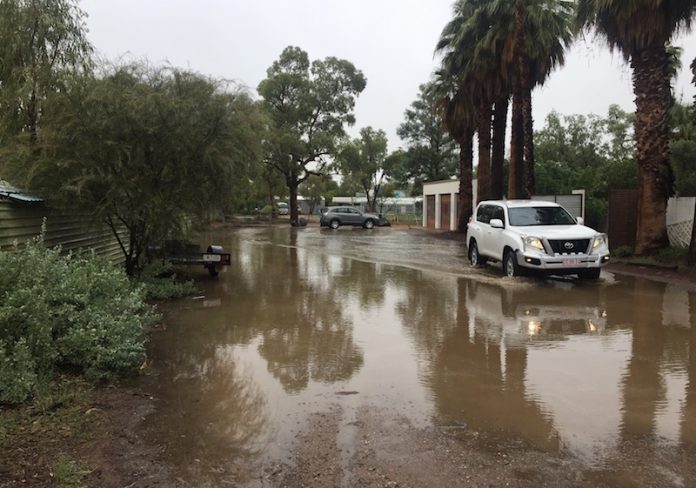 Veteran tour operator and Eastside resident Charlie Carter says there has been “42 mm of steady rain over night” – brilliant news.

However, as nothing is ever perfect, the “Lake in the Lane” leading from Lindsay Avenue to the back of Ross Park School has formed again.

“Saw one parent carrying a child across it this morning.

“I’ve been on to the council about it for years but no result,” says Dr Carter.

“It is also the rear access to my place, heavily used.”

Heavy weekend rain has propelled Alice Springs to its wettest wet season in a decade after an earlier rain band this month nudged the tally then to slightly above average, says the Bureau of Metereology.

“The last time it rained this much in southern NT was during the 2010-11 wet season, also a La Niña event.

“So far this season 276.6mm of rain has fallen at Alice Springs’ airport rain gauge. This is above the wet season average of 213.4mm and is the highest total since 491.4mm was recorded for the entire 2010-11 wet season.

“Rain has eased in Alice Springs this morning, with some light drizzle expected this afternoon. A partly cloudy day is in store for the town tomorrow with a slight chance of a shower,” says BOM.