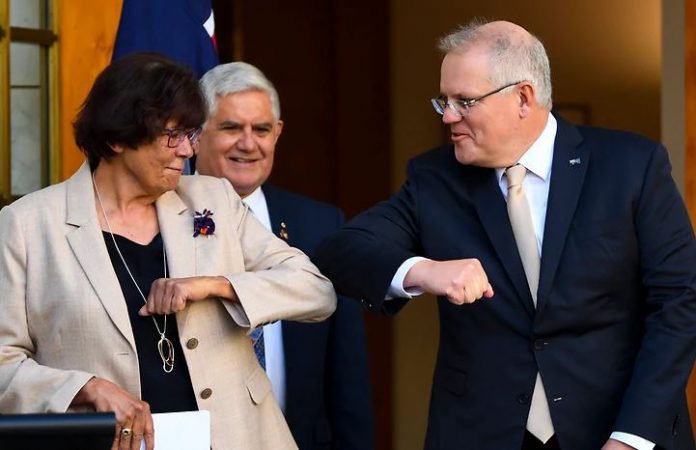 Black politics is a mystery, Always Was, Always Will Be: In the parallel universe of Indigenous funding, Minister for Indigenous Australians Ken Wyatt is sitting on $1.2 billion idle in the bank while governments and businesses are facing what could well become the world’s greatest financial catastrophe. And Mr Wyatt doesn’t think a few thousand dollars is worth spending on an historic account of The Bungalow, while rubbing shoulder – or elbows – with Alice Springs Aboriginal leader Pat Turner as she delivers the annual oration named after the children home’s most celebrated resident. Two comments.

Charlie Perkins was born at The Bungalow, Alice Springs, in 1936.

His niece, Pat Turner AM delivered the 20th Dr Charles Perkins AO Memorial Oration at the University of Sydney last week as part of NAIDOC week.

She has called for strengthened Indigenous Government partnerships as a way of delivering better outcomes for Aboriginal people.

This means that unified and purposeful action for Aboriginal people must continue and develop.

Around 55 Aboriginal organisations at present work with governments to close the gap with Pat Turner being the convener of the Coalition of Peaks, as the group is called.

Her experience in government has developed a new way of working, which is “based on negotiation and shared decision-making between governments and Aboriginal and Torres Strait Islander People”.

Citing the life of Charlie Perkins, Pat Turner emphasised that Indigenous organisations need to be keenly aware as to how the Australian system works in the respect that using the political system within a framework of media power is essential.

She emphasised strongly that the past treatment of Indigenous Australians was a terrible record of injustice, racial vilification and neglect.

Quite a large part of her oration focussed on Charlie Perkins and his contribution to Aboriginal rights.  When she was younger Charlie would talk to her about his activities to do with Aboriginal rights.  He always worked with courage and fire.  Charlie was very inspirational.  He never stopped talking about the appalling treatment of Aboriginal people.

Following Charlie’s example Pat Turner has worked for a long time from inside government to effect positive change.  From there she says that Aboriginal organisations have become more effective in delivering positive outcomes especially with governments.

Pat Turner’s oration was quite inspirational and positive about the future for Aboriginal and Torres Strait Islander people.  However, she qualified that by outlining areas she described as unfinished business.

Some of these include a First Nations Voice to the Commonwealth Parliament, national Truth-Telling and Treaties and a need to demonstrate that government institutions and bureaucracy can embrace change and reform, as historically this has proven difficult.  Health, housing, essential services, education and employment still remain as priorities.

If Charlie Perkins was still alive, he would surely be at Minister Wyatt to support ‘The Bungalow’ project.  Perhaps Pat Turner is of the same mind?  Given her drive and enthusiasm her experience would be invaluable in bringing this project to fruition. Many Indigenous enterprises require persistence and determination, to which Pat Turner has alluded.

The article “Bungalow Days Matter” published in the Alice Springs News on August 31 argued that a professional and extensive historical account needs to written about The Bungalow and its impact. It is something Australia owes to the stolen children.  Someone has to bring the garden gnomes to life.

John P McD Smith is the Chair, St Francis’ House Project. Its website chronicles the outstanding record of achievement by former residents of the home including leaders in politics, education, sport and the arts.

The Aboriginal Benefits Account (ABA) provides funding for one-off projects; projects that are specifically for the benefit of Aboriginal people in the NT; not including projects that should be funded by other sources of government funding; and preference is given to NT based Indigenous applicants.

Apart from ABA the recipients are individual traditional land holders and the NT land councils.

As demands for more money were reaching the usual NAIDOC crescendo, and prompted by a prominent Aboriginal person in The Centre, we asked Mr Wyatt, who together with Federal Cabinet has control over the ABA’s $1.2 billion, currently on idle term deposits, why is he is not using it, to Close the Gap, for example.

He replied: “The Morrison Government is committed to working in genuine partnership with Land Councils [and] it would be inappropriate for the Minister to act unilaterally as suggested.”

A noble gesture, to be sure.

So, is the Central Land Council making suggestions to Mr Wyatt about spending the billion dollars plus?

On November 12 at 6:19pm we emailed these questions to CLC CEO Joe Martin-Jard.

We’ve received no acknowledgment of our email, let alone a reply.

PHOTOS: At top – Pat Turner, who delivered the 20th Dr Charles Perkins AO Oration, with Minister for Indigenous Australians Ken Wyatt and Prime Minister Scott Morrison. Above  – Hetti Perkins, Charles Perkins and Eileen Perkins celebrate his graduation at the University of Sydney in 1966.