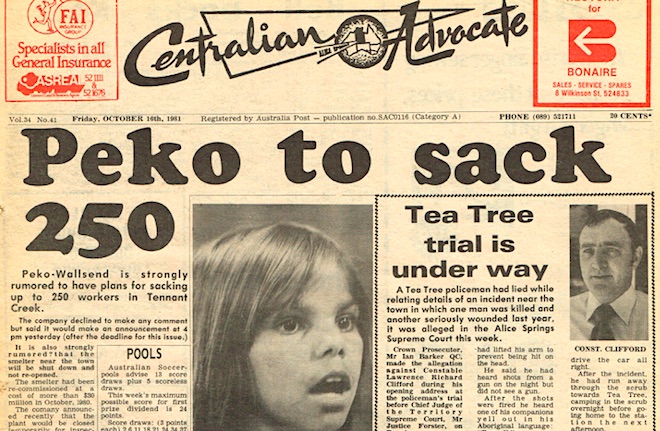 It is the first time a police officer will face a murder trial in a First Nations death in custody case in the Northern Territory in modern history.”

So begins an article published this week in The Conversation, an online journal in which academics collaborate with journalists to produce research-based news and analysis.

The article, headlined “Kumanjayi Walker murder trial will be a first in NT for an Indigenous death in custody. Why has it taken so long?” has since been reproduced on the ABC’s site.

This contention of an historic first has also been made this week in the Sydney Morning Herald and the National Indigenous Times, possibly among others.

Local historian ALEX NELSON however points out that a police officer has previously been charged with the murder of an Aboriginal man and tried here in Alice Springs.

The Conversation’s article has been updated to include a reference to this case, but the headline and introduction making the claim of an historic first remain unchanged. The ABC’s version has not been updated. 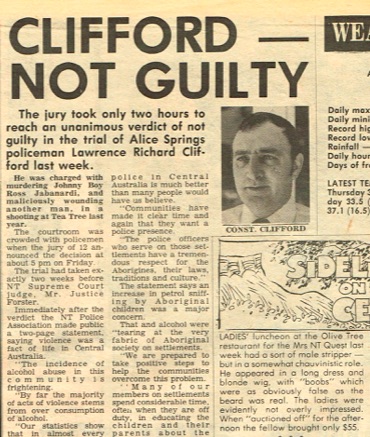 Exactly 39 years ago this week a murder trial in the Alice Springs Supreme Court concluded with the unanimous jury verdict of not guilty for First Class Constable Lawrence Clifford for the shooting death of Johnny Ross Jabanardi at Ti Tree, 180 km north of Alice Springs, on July 20, 1980.

This event involved a violent altercation between two NT police officers and a group of Aboriginal men, when police stopped the car in which the men were travelling. This culminated in beatings of the officers and the killing and wounding of two Aboriginal men respectively with a firearm. (This incident, by the way, occurred within a month of the disappearance of Azaria Chamberlain at Uluru on August 17 that year).

Two court cases arose out of the Ti Tree shooting. The first involved five Aboriginal men charged with assault and resisting arrest. There was considerable anger and outrage generated by this case, including protests at the entrance to the then new Alice Springs courthouse, now the Local Court.

The second case was triggered on August 14, 1981, when the Alice Springs Coroner’s Court’s adverse findings led to charges being laid against Constable Lawrence Clifford for the murder of Mr Jabanardi and the malicious wounding of Geoffrey Pepperill.

The Supreme Court trial commenced on October 10, 1981 in Alice Springs; and it’s of interest to note the Crown Prosecutor was Ian Barker QC, later to become prominent in the prosecution of Lindy and Michael Chamberlain. However, unlike the Chamberlains, the jury in this case determined on October 30, 1981, that Constable Clifford was not guilty.

The Ti Tree shooting incident was one of five cases in Central Australia considered by the Royal Commission into Aboriginal Deaths in Custody during hearings in Alice Springs held in the first week of October 1988. There had been some controversy over the inclusion of this case for consideration by the Royal Commission. [ED – This turned on whether it could be considered a “death in custody”. The commissioner took the view that it could be, that the deceased reasonably would have seen himself as held by police and not free to leave. The commission’s detailed discussion of the case can been seen here.]

It’s quite extraordinary, in my view, that such a significant legal case in the Northern Territory is apparently all but forgotten.

Images: Centralian Advocate reports of the trial and verdict, dated October 18 and November 4, 1981. Courtesy Alex Nelson. Unrelated to the case, the girl in the feature photo of October 18 is named as Christeen Kopp, aged 11, practising for a “Sing Out” at Alice Springs High School.