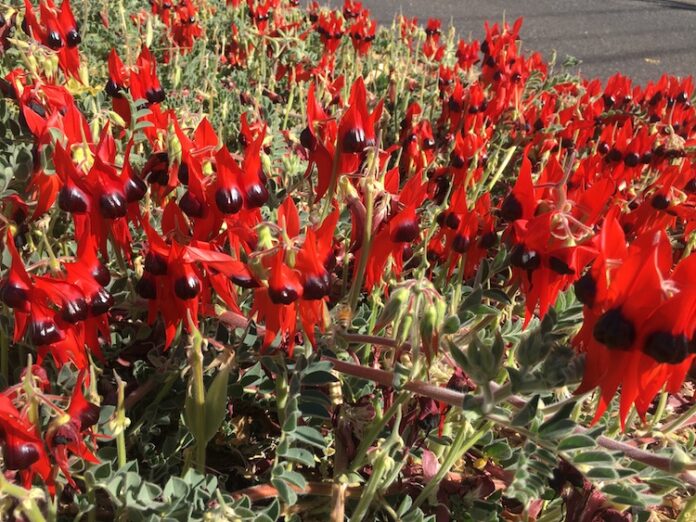 Having a garden that regenerates itself annually with little to no effort is the ultimate achievement a gardener can attain, and it’s not so hard to do here in Central Australia despite our potentially extreme climatic conditions.

There are three excellent examples of self-supporting public gardens in Alice Springs where almost no human intervention is required.

Some litter collection is necessary at times and generally after rain some weed management is required. Otherwise these three gardens look after themselves.

The round-about on the Undoolya Road and Lindsay Avenue intersection (above) was planted out sixteen years ago by horticultural students from Centralian College in 2003-04 and part of that planting were three Sturt’s desert peas, several eremophilas and a curry wattle, Acacia spondyophylla.

This round-about garden was irrigated for the first five to six years by a drip irrigation system but no other assistance has been given.

Today the round-about is a mass of desert pea and two curry wattles. Both are however self-sown after the original plant died following a savage winter when the temperature dropped to below minus five degrees. (The curry wattle generally grows in protected areas in the ranges or further north of here when in the open.)

Outside Peter Kittle’s car yard and in the dividing centre median strip on the Stuart Highway today the desert peas are looking glorious and have been for years.

This garden receives very little attention with some litter collection and weed management. It is a self-sustaining garden.

The third garden is another round-about outside the entrance to the airport.

This garden is dominated annually by magnificent displays of ptilotus exaltatus commonly referred to as mulla mulla, pussy cat tails or little joey. Aside from again some litter collection and weed management literally no human intervention is required.

The only difference with this garden to the other two is it is irrigated by drippers three times a week for an hour each time to essentially support other plantings in the round-about and outer verge gardens.

Why then are these three gardens able to look magnificent year after year and doing it all themselves? Let’s then look at what they have in common that is contributing to these gardens being self-supporting.

The secrets essentially lie in the initial soil preparation, the type of plants introduced into these gardens, most importantly the surface treatments given and to a lesser extent the limited watering regime being maintained while these gardens established.

I will use the round-about garden at the Undoolya Road and Lindsay Avenue intersection as the example as I was directly responsible for this project and even today I generally manage its maintenance.

Initially the poor soil in the round-about was excavated to a depth of at least 50 cms and then backfilled with clean virgin top soil that had a pH of 6.5. It was typical of the soil found in much of Central Australia where the desert flora flourishes all alone.

When planting holes were dug a little quality potting soil was blended with the soil to improve the soil’s water holding capacity and a native fertiliser tablet was buried in the planting hole. This was only undertaken for each planting site, not for the entire garden.

Plants only from Central Australia were introduced into the plant palette, plants either designed to live for at least two decades or annual or biannual plants able to readily produce seed that would germinate regularly when conditions were ideal. 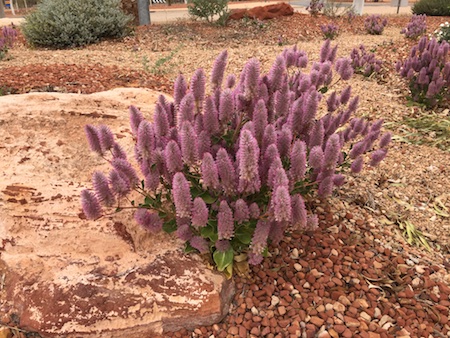 While the Desert Pea is not found naturally around Alice Springs it does grow along the southern and western borders of the NT and flourishes into South Australia and Western Australia, it’s a real desert plant.

The mulla mulla or ptilotus exaltatus (pictured) and many other forms of the ptilotus can be found thriving throughout Central Australia.

Both plant species respond well to favourable climatic conditions. The desert peas have for almost two decades quickly emerge following reasonable rains able to put real moisture into both the top and sub-soil where the desert plants quickly seek out deep down moisture are able to sustain their continued growth for several months.

The Undoolya Road round-about I have hand watered twice this year to sustain good growth immediately after the summer and early autumn rains. They have not been artificially irrigated for five months.

The second real secret aside from bringing in the desert sands to form the foundation base for the garden is the application of the particular mulching materials on the surface.

Screened laterite and various 10 to 20ml aggregate rock are consistent with all three gardens. With the Undoolya Road round-about white sand has also been used as a mulching material.

Both the rock mulches and the sand are ideal surface treatments as any seed from the desert pea or the ptilotus will easily settle in these mulching soil treatments waiting patiently. Once the climatic conditions are ideal with the seeds lying in wait they will quickly germinate and burst forth with lush vibrant growth when conditions are ideal.

With desert plants they are opportunistic, they can wait for months or even many years for the conditions to be right and up they come.

The three example gardens I refer to have demonstrated annually or twice annually for many, many years to present their full glory to the town with little management required by the local authorities.

Its simply a matter of attempting to replicate what occurs naturally in nature. Initially some assistance maybe required with irrigating plants when first introduced into the garden.

The perennials do need regular watering initially however as they establish the watering regime can be adjusted to reduce their reliance on our intervention and with the right plants they will eventually survive with little or no irrigation needed.

Once you have created the right environment the garden should sustain itself with minimal interference.

The three public gardens I relate to have demonstrated this for many, many years and will continue to do so until some misguided gardener wishes to readjust the balanced mini-micro environments that have been created.