Home Issue 34 Near and far, impending and uplifting
Issue 34Volume 25

Near and far, impending and uplifting 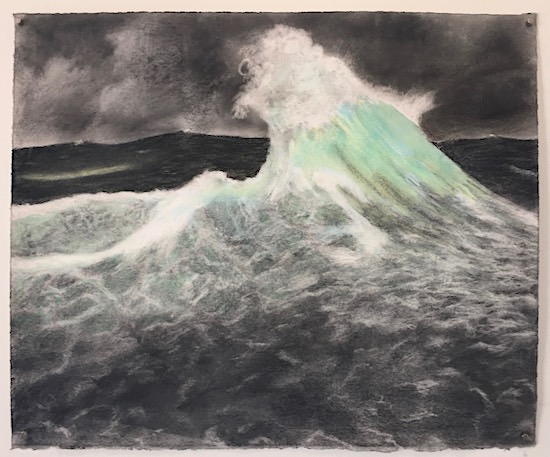 Beneath rain-laden clouds the gallery space dissolves. A ship appears, a tall ship under sail, tiny on the distant horizon, dwarfed by the immensity of sky and sea.

On land, a range brings the horizon closer. The simple huts, seemingly random in this large landscape, look at once inconsequential and yet they draw my eye. Are they the start or the end of something?

Perhaps more the middle, I think, seeing the tall ship as bringing a kind of end – in Australia, to the country’s exclusive inhabitation by First Nations.  The huts, and the hull of a small rowboat boat one contains, as the relics of the invasion that followed.

Over my shoulder, a wild sea, with a sickly green slick tossed up on its waves.  A sense of foreboding takes hold. 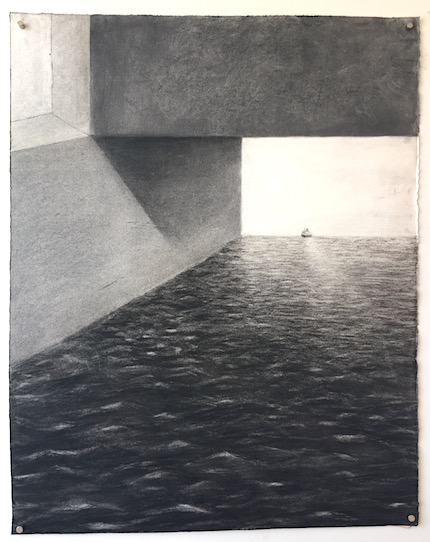 Beyond, the foreboding is echoed in an urban frame. There’s a tiny boat again, this time looking more like a passenger ferry, making its way to who knows what destination. The idea of safe harbour gives way under the weight of the giant structures bearing down on it. And the body of water looks like it might flow over the edge of the Earth.

The scale, already more than unsettling in this scene, changes to up close in the next, as if I’m halted for a moment looking down at my feet. A patchwork of concrete and bitumen paving and kerbing, the grid of a drain, the shadow of a pole, and looming large, a toy tipper truck on monster wheels – we draft children early, especially boys, into the business of constructing our world like this.

These were my thoughts on a first tour of Suzi Lyon’s haunting exhibition, Travels on a distant star, showing at Watch This Space. I say ‘haunting’ because it has stayed with me, sweeping me up in its elegiac mood and ponderings at a vast scale.

It strongly inhabits the gallery space and transports the viewer beyond it at the same time. It is clearly communicative yet not didactic. Ideas and politics are grappled with in the imaginative realm.

On a second tour I allowed myself to read the brief wall texts. They are approached similarly, not explicative but evocative, deeply personal, poetic, like the lovely and poignant title of the show. They take you into Lyon’s world, her specific experiences and perspectives, but skilfully leave you free to roam in your own reflections, maybe pushing you along in a quiet dialogue with her.

The titles and sometimes the texts make more precise her particular concerns. For instance, in that  image of the chemically stained ocean, her thoughts are about all the plastic that we have allowed to contaminate it – so utterly affronting when what she set out to make was an image of  “a biblical wave … like the psalms that deliver out of great distress”. The titles River Styx and Road to Hades underline the sense of foreboding that emanates from those images, while the texts of personal reverie work against that sense in a consoling way.

Lyon won last year’s Lofty Award for her contribution to the creative life of Alice Springs over many years and having this opportunity to exhibit is part of that award. She works in a range of media, including photography, film, and ceramics, and her shows always have a strong feel for the way they create a space for viewing and thinking. And the work is always imbued with a deep feeling for the Earth and its elements as well as for human communities, flawed and beloved.

Her artist’s statement evokes the process she went through as she thought about this show, buffeted as it was by the catastrophes of this most challenging year. What has emerged is no litany of complaint or manifesto but something rather like those psalms she refers to, a deliverance.

As I write this I am reminded of a line in Craig San Roque’s and Joshua Santospirito’s The Long Weekend in Alice Springs: “We can save ourselves with imagination.” We can do with some saving right now – an injection of energy, uplifting spirit and consolation as we keep going. That is what Lyon so generously and lovingly offers.

Related reading on past shows by Lyon:

The light work of many hands

Immerse yourself in this watery world