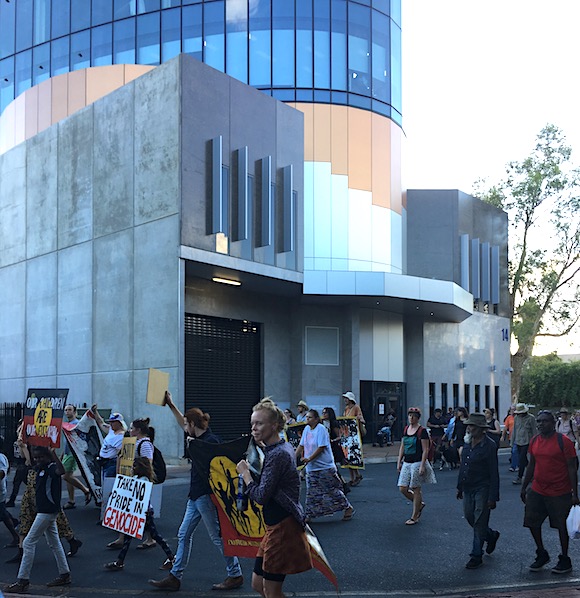 And we’ve got a police force that is three times bigger per head of population than the national average yet there are always demands for more.

For Bernard Hickey, a psychiatrist with 20 years professional service in the Territory and the Greens candidate for Araluen, all this is heading in the wrong direction, as signalled by that brand new courthouse, the monumental Supreme Court, our tallest building ruling over the town.

The right direction, he argues, would be to pursue “defunding the police”, a policy idea originating in the United States that has gained traction in the wake of the George Floyd killing  and the massive protest that followed.

Defunding does not mean that police forces would be scrapped or would lose their entire budget; rather that significant resources be directed away from conventional policing and towards social services.

More than a dozen US cities, including Minneapolis where Mr Floyd was killed, have considered substantial cuts to their police budgets, according to the New York Times.

“The  general thrust of the idea,” says Dr Hickey (at left), “is that police and punishment do not prevent crimes. Community healing, connectivity, increased health of a community prevents crime.”

Its implementation would involve looking at different roles for the police and community, putting resources into “restorative principles of engagement, restorative justice, transformative justice”.

This would mean getting the community involved in directing changes to reduce and prevent crime and “around here that would mean involving the Aboriginal Elders directly”.

No studies find that punishment and imprisonment prevent crime, says Dr Hickey, yet the imprisonment rate for Aboriginal males is “ridiculous, something like eight times the national average” and comparable with the “sky high” rates for African American males in the US.

(These figures are borne out by criminologists in a FactCheck for The Conversation, who concluded that Noel Pearson’s statement on Q&A in 2017 that Indigenous Australians are “the most incarcerated people on the planet Earth” is correct, based on the best available international data.)

Alice’s policing and prison industry takes Dr Hickey back “to the way Australia started as a penal colony.

Wherever you get this kind of “non-caring disenfranchisement of persons, poverty” you get high rates of crime, he says.

Addiction, that goes hand in hand with trauma, with over-crowding, and witnessing violence, is another part of the picture. Add in the disinhibiting effect of alcohol and you are going to get “people having violent responses”, he says.

So, if a restorative justice model was in place, what would that look like?

He gives the example of a young person wandering around town late at night, caught in act of damaging something (as happened earlier this week when young people smashed windows of a number of businesses in Todd Mall).

Under “restorative principles of engagement” relevant Elders would lead the response to that incident.

“There are grandmas and Elders already trying to do this,” he says.

Everyone sits down and talks about what’s going on in the young person’s life, as a way of discovering solutions, and the young person coming to understand the damage they may have done.

“It’s not  a punishment, it’s a therapeutic response.”

It leads a young person to understand how they and their actions fit in with law, culture, what their family and wider community want.

A health assessment is also done and the whole process can lead to offers to enter other programs, for instance Bush Mob, if substances are involved.

The approach can work with adults too: “There are great examples around the world. People can be reintegrated to community living.”

And what happens if the young person goes out and does the same thing again?

“Then the response can be intensified and more supports wrapped around the young person.

“Police can be facilitators of this process.”

Existing diversion programs already accomplish some of this but face difficulties in having supports available for the kids in the program.

Dr Hickey and the Greens are not alone in advocating for a 24-hour drop-in centre for young people. It would offer a therapeutic environment, where young people can feel safe, get fed, get access to learning, support, listening.

What does he think about a youth curfew?

He sees the idea as “a political stunt”: “It doesn’t address any real need.

“If you have a 24-hour place that’s made attractive to them, young people would want to go.”

Would they have to stay, in other words be detained?

He doesn’t answer directly: “Being out on street at night is not a crime.” So the 24-hour centre is about having an attractive alternative to that.

“If they are committing crime, they’re going to be safely apprehended and then a response under restorative principles of engagement can occur.”

Photo at top: A ‘Kids on country’ protest marching past the Supreme Court in November 2017. From our archive.

Candidates’ views during the recent election ‘debate’ hosted by the Chamber of Commerce:  Caring for kids, stopping offending: The town’s big issue.