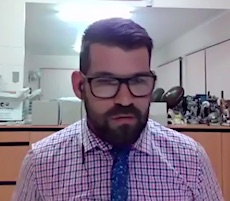 The Town Council will move today to take up the NT Government’s dollar for dollar discount voucher scheme, assisting local businesses affected by the Covid-19 downturn.

The scheme has some of the hallmarks of one proposed by Deputy Mayor Matt Paterson (left, attending last night’s Zoom meeting) but knocked on the head by council back in May.

DM Paterson last night quipped that imitation is a great form of flattery, noted that council could have led in this space – instead Darwin, Katherine, Palmerston Councils are all ahead of Alice –and urged council to boost its financial contribution to scheme.

He referred to the multiplier effect in Darwin’s economy noted by Chamber of Commerce Chief Executive Officer Greg Ireland.

The Darwin experience shows it is successful, said DM Paterson, small business needs it – “it will have nothing but a positive effect”.

He generally had the support of councillors, receiving acknowledgement from them for his early initiative, but didn’t get support for an additional allocation.

Most argued that extra funds might need to be drawn on later in the year after changes to JobSeeker and JobKeeper kick in and that council should keep cash in reserve until then. 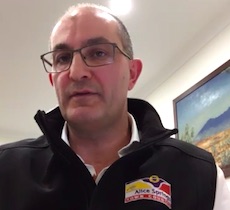 DM Paterson argued for raiding council’s internally restricted reserves ($28m set aside for for the eventual relocation of the landfill among other long term and contingency purposes).

Cr Eli Melky (right) warned against such an approach, referring to a number of council budget lines already impacted by Covid-19, such as the Regional Waste Management Facility, facing increased costs and decreased income.

Of council’s total $5m Covid response plan, only $1.8m is available for this kind of spend.

Darwin’s scheme, known as myDarwin, is an online platform that provides discounts to the community to incentivise spending in support of local businesses, with more than 350 Darwin businesses signing up for the scheme.

City of Darwin is sharing its on-line platform with other interested NT councils.

Nicole Walsh​, Alice Springs-based Chief Operating Officer of the NT Chamber of Commerce, says the “multiplier effect” of the voucher is seven-fold, with recipients spending additional money of their own.

The largest amounts were spent on cafes and restaurants, followed by food and beverages, then take-away.