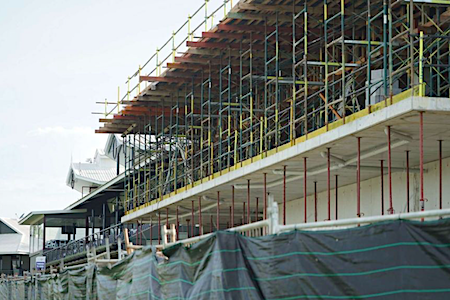 The real issue is not GST receipts, or other Commonwealth grants, tied or untied, but rather the inability of successive Northern Territory Governments to raise sufficient own source revenue, only 27% compared to 56% in other jurisdictions or, importantly, control expenditure growth. And where does a major slice of the Budget go? To maintain a bloated public service. Professor DON FULLER comments in Part Five of his analysis.

Between 2004 and 2016, the Territory’s public service grew by 40%, far outstripping the natural population growth of the Territory.

He is now sitting as an Independent, sacked by Chief Minister Michael Gunner from the Labor Caucus for speaking out about the Budget fiasco, and standing in Braitling in the election next month.

It’s the kind of comment Gunner suppresses, in disregard of good governance needing to be participatory, consensus oriented, accountable, transparent, responsive, effective and efficient, equitable and inclusive, and follow the rule of law.

The expulsion of McConnell, as well as fellow MLAs Ken Vowles and Jeff Collins critical of the government’s spending, significantly hampered their ability to effectively represent their constituents as members of a party they were elected to represent.

This appears to be to be a major contravention of the underlying principles guiding how a well functioning, healthy democracy should work.

This must include the rights of MLAs to participate in key policy formulation and decision making, in a major area of concern – Budget management – upon which an effective government depends.

It appears that there wasn’t even a vote held to exclude the MLAs.

This is very worrying as many of the decisions leading to the disastrous Budget outcomes were financial decisions made outside the normal Budget process.

The Gunner Government also fails badly on the need for prudence and care in a culture of financial management that many regard as erratic, inconsistent and irresponsible.

Despite the clear call by external experts to reduce Government expenditure, the NT Infrastructure Development Fund (IDF) approved a $10.5m taxpayer funded payment to Darwin water bottler NT Beverages despite the company being deeply in debt and on the brink of financial collapse.

The creditors’ report into NT Beverages operations found the company had spent $9.2m of that taxpayer funding in just four months. It remains unclear what the money was used for!

The administrator’s report also found NT Beverages owed more than $130,000 to the Australian Taxation Office, including penalties for not paying their employees’ superannuation contributions.

The NT Government’s member on the IDF board, a senior public servant, Jody Ryan, is reported to have declined to answer the ABC’s questions about this affair: Why she approved the $10m allocation less than two weeks after the NT Government threatened debt recovery action for $221,000 in unpaid stamp duty, in February 2018.

Ms Ryan was reported as also not answering questions over her personal role in overseeing the funding as a board member or why taxpayers later loaned the company an additional $100,000 to pay wages.

As pointed out by Vowles, McConnell and Collins, without clear and uniform standards and guidelines, Government administration is in danger of squandering public funding in an undisciplined and uncontrolled manner and becoming dysfunctional and chaotic. 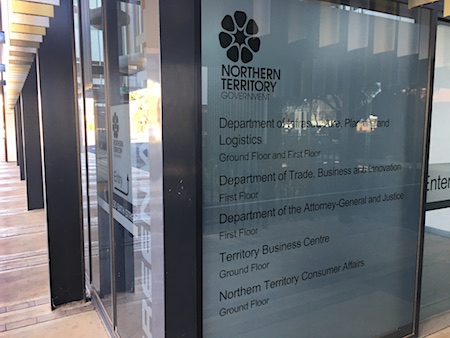 However, unfortunately for the people of the Territory, the Gunner Government was in no mind to listen and take wise advice. Rather, they seemed content to shoot the messengers and pile on (somewhere, anywhere?) regardless.

Between 2004 and 2016, the Territory’s public service grew by 40%, far outstripping the natural population growth of the Territory.

The NT Treasurer released the 2019-20 Budget in early May last year. This indicated that the Territory’s interest bill would soon exceed $1m a day and that forecast debt would climb to $6.2 billion during the period.

It followed the release of former WA under-treasurer John Langalount’s Plan for Budget Repair in April, which set out a range of savings measures designed to help the Territory claw back a surplus by 2027-2028.

But Moody’s Investor Services report author John Manning was sceptical as to whether the Territory Government had the ability to implement the plan and said it would “require a lot of ducks to line up.”

Importantly, even though spelt out by Langalount to the NT Government on how to bring Government finances under control, Moody’s Investor Service stated: “The Territory’s plans to cap, and ultimately reduce, this rising debt burden are unclear.”

Territory finances are due for review: “The negative outlook indicates that there’s a possibility that the rating would change and that likelihood if it moves, would be down,” Manning said.

Such downgrades are important as they signal higher interest costs per day for the on-going payment of escalating Territory Government debt.

Langalount had provided very clear warnings in his Report to the NT Government to avoid overspending, particularly outside the Budget cycle.

Despite this, it was being reported in October 2019 – months before COVID-19 – that the debt-laden Gunner Government spent almost $170m on un-budgeted policy changes, including $12m for a grandstand at the Fannie Bay racecourse, in the two months after its May Budget was handed down.

In the Annual Financial Report tabled by Treasurer Nicole Manison the report showed increases in revenue because of higher than expected GST receipts and higher taxation and royalty receipts than previously forecast.

However, this improvement was countered by spending on un-budgeted policy changes, including $64.5m in capital grants, such as upgrades to sporting facilities, and community infrastructure.

By early 2020 the Chief Minister was being confronted by serious questions regarding probity, accountability and transparency involving the construction of a grandstand.

This was exacerbated by the fact that the racecourse was deep inside the Chief Minister’s own electorate of Fannie Bay.

Documents obtained by the ABC show the Chief Minister’s former chief of staff helped draft a letter so that the Darwin Turf Club could receive funding from the Government for the construction of the new grandstand. This letter was then used by the club to support a $12m funding request for the grandstand from public funds.

The Chief Minister claimed that this conduct was “completely inappropriate”.

This is seen by many as a potential major breach of Government probity, accountability and transparency.

The Chief Minister has provided documents to the NT Independent Commission Against Corruption for evaluation and assessment because of such concerns.

The grant has been controversial since it was first announced in July last year, when critics questioned the merits of funding a corporate grandstand at a time when the Territory was facing unprecedented levels of debt.

Concerns intensified when it also emerged that the winning tenderer to build the grandstand was Jaytex Construction. The company is part-owned by the Turf Club’s chairman, Brett Dixon, it was reported.

It appears to be both important and relevant that the Chief Minister himself responded to a letter from Mr Dixon, telling him he supported the assertion that the project would create a world-class facility.

“I look forward to a timely outcome from that process,” Mr Gunner is reported to have written.

It is therefore difficult for many to believe that the Chief Minister was not involved in the processes and financial decision to provide funding for the construction of a grandstand within his electorate.

The highly respected independent MLA Gerry Wood was reported as telling the ABC that he was concerned the independence of the Government’s decision-making process had been compromised.

He urged the Chief Minister to ask the Auditor-General to review the process.

“From what I hear now, I think there is a lot more there that needs to be looked at,” Mr Wood said.

“From whether the due process was done and whether the turf club got favourable treatment by using staff within the Government — in this case the chief of staff — to write a letter which was really weighted with the hope that the ministers would say, ‘Oh yeah, $12 million, we give it the tick’.”

Such concerns and increasing lack of confidence and distrust of Government highlight the damage that can occur when the essential underpinnings of democratic government appear to many to have been ruptured, by inappropriate Government actions – particularly involving the Chief Minister.

In this case the Chief Minister appears to operating at anything but arms length from a commercial transaction that he can be seen to be personally benefitting from. It appears that there is potential in such processes for a clear conflict of interest.

The author of this series, Dr Don Fuller (pictured), holds a first class Honours degree and PhD in economics from the University of Adelaide. He has worked as senior public servant in the Territory and as Professor of Governance and Head of the Schools of Law and Business at Charles Darwin University. He grew up in Darwin and attended Darwin High School.