ABOVE: HMAS Darwin enters Darwin Harbour passing HMAS Coonawarra as it proceeds to come alongside Fort Hill Wharf, Darwin, for the last time before decommissioning in December 2017. (Department of Defence photo.) BELOW: KC-30 refuelling aircraft.

Youth crime, phenomenal Budget blow-out and COVID-19 move over: The August 22 election has a new issue the voters can expect to be harangued with.

It’s the supposed fortunes from defence spending, $8 billion in the NT over 10 years, mostly in the Top End, part of a staggering increase by $270 billion across the nation.

It’s being touted by Territory and Federal leaders in the way that Michael Gunner promotes most projects,  including the national Aboriginal art gallery in Alice Springs: We need it because our tradies need the work.

Of course, the massive military boost has the troubling aspect of making money from creating assets to be used for killing people, but ethical questions are neither raised nor answered.

The people of the Territory had scant opportunity for a say on these matters before they were told by Scott Morrison and Mr Gunner, mostly during this week, what’s going to happen on their patch.

“Defence” spending is hardly the appropriate way to describe it; “offence” sounds more like it: Tindal air base will be upgraded “to support a squadron of the F-35A Joint Strike Fighters, KC-30 refuelling aircraft and a number of forward deployed, MQ-4C unmanned aircraft” – the latter also known as drones which Australia’s American ally uses for not infrequent extra-judicial assassinations in several countries which we are not at war with. 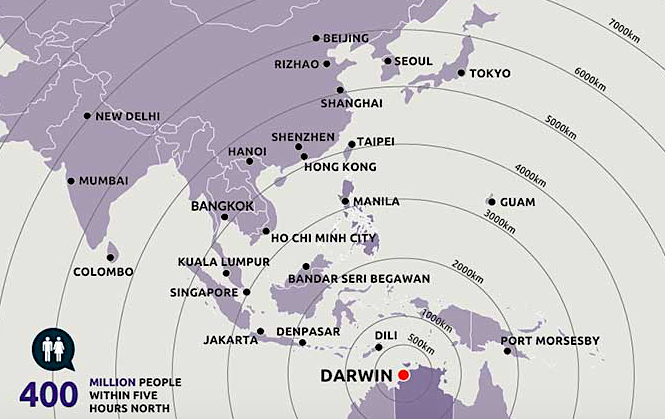 KC-30s have a range of nearly 12,000 kilometres, capable of flying almost as far as Beijing and back, which gives them an enormous operational radius from Tindal (see image, Department of Defence).

The current media releases dealing with “US Enhanced Air Cooperation initiative” and “US Force Posture Initiatives” as well as “closer interoperability with US forces” in these military developments, and especially mentioning the capacity of the Australian Defence Forces “to operate further towards our northern approaches” and “for national defence and as a forward base for regional engagement” all beg the question: Are we gearing up for defence or attack?

The involvement of the Territory public in the decision making has been minimal, according to two Central Australian Members of the Legislative Assembly, Chansey Paech (Labor, Namatjira, now also the Speaker), and Scott McConnell (formerly Labor, now Independent in Stuart, and standing in Braitling in August).

Mr Paech, who has the US-Australian military base Pine Gap in his electorate, when asked by the Alice Springs News supported his government’s economic arguments but is frank about the limited consultation that has taken place.

Mr McConnell, who was sacked from the Labor Caucus by Mr Gunner for being critical of certain policies, is blunt when asked how much the Caucus has been told about the military build-up: “Nothing, absolutely zero. We were not informed. The Cabinet would know.”

He says the public has not been asked if it is a “willing participant in the further militarisation of the north.

The NT is home to more than 6,000 defence personnel, including ADF permanent and reserve members and Australian Public Service employees, spending $2 billion in 2018 to 2019, or around 7.6% of the gross state product.

Mr Paech, who in the August election will be standing in Gwoja in the western half of the NT (south from Victoria River to the SA border), says the Chief Minister has “carriage of those defence conversations.

“I’ve had no negative reactions from constituents when the Chief Minister has spoken about this in his year ahead speech in Alice Springs [and] when the government has made those statements. 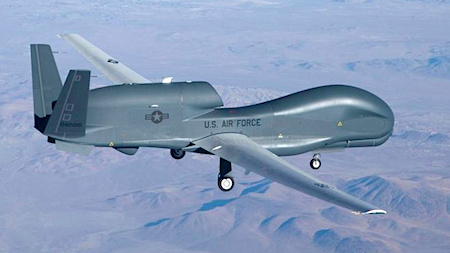 “I’ve not had adverse reports back to me.

“We’re accepting the Commonwealth’s investment into the Territory about which the Chief Minister and the Prime Minister had an ongoing dialogue,” says Mr Paech.

MQ-4C drone to be flown from Tindal.

“The Chief Minister has often spoken about the economic benefits. The [planned] ship lift will be used to service Navy ships. There is money, people’s jobs.”

PAECH: I’m not privy to this. I don’t have a portfolio. I am not in Cabinet. If constituents want to know I am always happy to get the information for them.

NEWS: Has there been a specific, deliberate effort by the NT Government to seek consent from the public for a major military upgrade?

PAECH: Katherine and Tindal are not my area. I don’t know what consultation has taken place with the local community. Tindal was established as a military facility, locking in the potential for future growth and development.

PAECH: That’s part of the consultation, one would assume it would have happened when we first reached an agreement for the United States to have a presence in Darwin.

NEWS: With the current boost in military spending in the Territory, has the Government made an effort to consult with the whole population?

PAECH: I’ve not been involved at that level. I would suspect we welcome that investment. It brings with it a large economic opportunity.

NEWS: Was the Caucus consulted about this?

PAECH: The discussion around the United States military having a presence in Darwin has existed long before I was a local Member.

NEWS: During your four years in Parliament, has that issue been a prime issue in Caucus?

PAECH: No. The issues that come to Caucus are things like remote housing, roads, the economy.

NEWS: To what degree would Mr Gunner rely on the upturn of the economy flowing from this massive increase in defence spending?

PAECH: That’s a question for Michael.

NEWS: What do you think?

PAECH: I would think it is a welcomed opportunity, but the Government has done significant work to diversify the economy and make it stronger.

Mr Paech made it clear that he is always prepared to take views and messages from constituents to the Government.

Mr McConnell says he suspects the Federal spend is mostly re-directing money from other areas, not new money.

He is adamant that NT claims of massive economic benefits are “absolute garbage” as “military construction is highly specialised” and mostly beyond the scope of local operators.

“There is no magic carpet flying in.”

Mr McConnell says the NT public and even the Labor Caucus would have had “absolutely no say” in these military issues. Advice from the Federal Government would have gone little beyond a “courtesy phone call”.

Defence Minister Linda Reynolds (pictured) says over the 12 months to March this year “Defence has invested around $500m in the NT, including support for the Jindalee Operational Radar Network at Harts Range and Mt Everard (about 305 jobs); sustainment elements for the Tiger Armed Reconnaissance Helicopter fleet supporting around 55 jobs and sustainment, maintenance and repair for the Armidale class patrol boats (around 145 jobs).

The Alice Springs News asked the  Department of Defence: The Australian Government will be spending in the NT $8 billion over 10 years. How much will the US Government be spending?

The department replied: “To date, the United States Government has awarded four construction contracts for USFPI infrastructure projects worth US$101.785m in the Northern Territory.”

The locations (all apparently in the Top End) are shown on a map on the department’s website which has the following caption: “The Australian and US governments have agreed to invest about A$2 billion on a range of capital infrastructure works and supporting arrangements to assist with implementation of the Initiatives.”