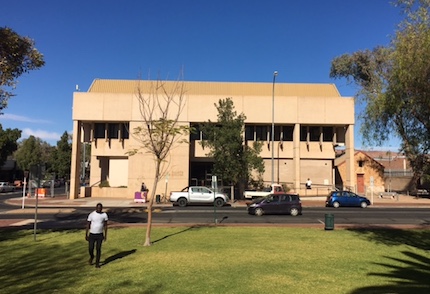 Zachary Rolfe, the police officer pleading not guilty to the charge of murder of Kumanjayi Walker in Yuendumu on November 9 last year, is moving.

He will remain within the ACT, but after alleged “conduct” directed towards him and his family a change of address has been approved by Judge John Birch in the Alice Springs Local Court this morning.

Mr Rolfe appeared by phone, legal counsel and the prosecutor by video link.

The new address is the subject of a suppression order.

The details supporting the application were by affidavit, so further information is not known at this stage.

The Warlpiri Parumpurru [Justice] Committee, whose secretary Lisa Watts was present in the court, had no comment.

Committee chair Ned Jampijinpa Hargraves has spoken forcefully about the committee’s objection to Mr Rolfe being granted bail in the first place.

The concern is both with the conditions under which it was granted – by phone, outside court office hours with an on-call judge – and that there is a presumption against it for a person charged with murder. Mr Hargraves asserts that Yapa (Indigenous people) would not be given this chance.