Home Issue 25 With Gunner, great advice is of little use
Issue 25Issue 26Volume 25

With Gunner, great advice is of little use

John Langoulant, hired in late 2018 to sort out the NT Budget mess, made it clear that “persistently exceeding” approved spending targets with un-budgeted and unplanned outlays was much of the problem. The director at the Committee for Economic Development of Australia, and other high-profile economy managing position, made it clear the NT Government must adopt a Charter of Budget Discipline that, barring exceptional circumstances, would limit funding decisions to the annual budget development process. When this year CIVID-19 came crashing through the door – circumstances that could hardly be more exceptional – fiscal commentators were running out of adjectives: Unprecedented? Catastrophic? Fatal? Existential threat? In this fourth instalment Professor DON FULLER looks at a fiasco for which there is still no clear answer, with less than two months to go to the election.

Mr Langoulant wondered whether the Gunner Government had the competence to manage the Budget with clear rules and directions as he recommended.

Private investment is part of what could get us out of the economic mire but there is little sign of it. The six-storey accommodation complex in Gap Road (at right) now being built by builder Michael Sitzler and the Aboriginal Centrecorp is worth $25m but this expenditure is entirely underwritten by the government: The dwellings are mostly for health staff.

It is not evident that this important recommendation has been implemented, cutting at the heart of delivering essential services to the Territory community – including health, education and law and order, undermining trust in the government.

When Langoulant, for his interim report, sought community input in the development of budget repair, several dominant themes emerged, including:-

• The economy is struggling and businesses are closing, particularly in the Greater Darwin region.

• Business confidence is low and new projects are not imminent.

• Red, green and beige tape is creating uncertainty and is deterring private investment.

• Continuing Government stimulus is not sustainable.

• Public sector wages and entitlements are generous compared with the local private sector making it difficult for the private and community sectors to compete. 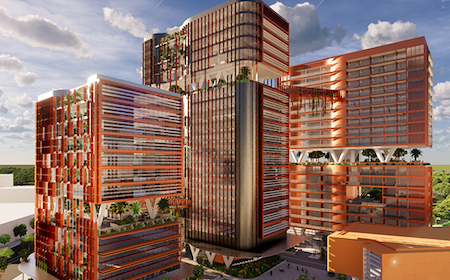 • Significant reform and productivity increases across the public service are needed.

However, such valuable input has not been acted upon in any coherent manner. This suggests an inability to deal with the complex challenges associated with economic and community development in the Territory.

Pie in the sky private investment project with help from the taxpayer? Proposed Charles Darwin University campus in the Darwin CBD.

• Whole of Government structural reforms to support the new fiscal strategy, including increasing financial accountability and transparency whose absence shakes the foundations of a democratic state and are commonly found within authoritarian states.

By December 2018 it was widely recognised that the Northern Territory was in “the throes of a financial crisis, with no immediate plan for fixing the deep fiscal problems”.

An excellent final plan was put in place by John Langoulant but the main question remained: Does Gunner have the discipline and competence to stick to it?

Treasurer Manison was forced to fly to Canberra, cap in hand, for emergency meetings with Federal Treasurer Josh Frydenberg.

The NT Government was borrowing and increasing debt, to cover day-to-day operating costs, such as the wages of public servants and interest on previous borrowings.

The Territory’s fiscal woes are not good for business confidence, according to the NT Chamber of Commerce, which lambasted the government’s “willy nilly” spending.

“There doesn’t appear to be too much in their plan. It’s go to Canberra, cap in hand to ask for a further handout,” CEO Greg Bicknell said.

“And what people I think would really like to see is the Northern Territory doing its bit to pull its weight in terms of these expenditure overruns.”

Charles Darwin University Associate Professor of economics Ram Vemuri said the Labor Government was not prepared to fundamentally change the way it did business, and warned of a “backlash”.

“The Government must change their whole approach to economic management — you can’t just do cosmetic changes,” he said.

“People are saying what has the thunderous [majority] of Labor actually done for the Territory economy?

“And the answer is very, very minimal. There’s been a lot of talk but they’ve been ignoring the warning signs for a long time.”

Three brave government members, Minister Vowles and MLAs Collins and McConnell, decided to state their well-justified concerns to the public that the Gunner Government was leading the Territory towards insolvency, after the Labor Caucus and senior members of the Gunner Government had taken no notice.

All three were forced onto the cross benches and out of the Labor Party.

At a press conference following his sacking Mr Vowles said the move was “an absolute bloody disgrace.

“This is a sad day for politics.

“We were elected to govern for the Northern Territory, not for ourselves,” he said.

“I have stood up many times for 18 months about the budget situation and nothing has improved.

“We saw the Mid Year Economic and Fiscal Outlook. We have spent $354 million more than we thought we would,” Mr Vowles said.

“Territorians should be asking us what is your plan for the future?”

Mr Collins said he received the news via a phone call that the three would be excluded from Caucus for the rest of the term.

Mr Collins told the ABC: “That motion was voted on before there was any debate or any chance to have a say, so yeah.”

It followed a series of emails where Mr Vowles told colleagues “the community has clearly lost faith in us.

“Colleagues, our budget situation is dire — our debt level is ridiculous for our population,” Mr Vowles (at right) wrote.

“We need to re-evaluate every announcement, every commitment, because we need to make the hard decisions for the future of the Territory, not decisions to enhance our re-election prospects.

“The community have clearly lost faith in us and in our ability to manage the Territory and our budget for them.”

“This is the beginning of the end for the Gunner Government, resorting to throwing team members under the bus when really we’re headed for a serious crisis,” Mr Mills said.

“And the question is: does the Territory possess the political capital to face the challenge that is bearing down on us?”

Presumably the alternative was to place the Territory once again under Commonwealth administration and control.

In this context it is important to acknowledge that the first Chief Minister of the Territory, Paul Everingham, had also questioned some years ago, whether the Territory was able to govern itself and whether it may be preferable if the Territory placed itself once again under Commonwealth control.

On the first sitting day for 2019 Independent MLA Jeff Collins delivered a stinging rebuke of his Labor colleagues, saying he has been “crucified” by “career assassins” in the party for daring to offer an opinion.

It came as exiled Labor backbencher Scott McConnell (Stuart) sided with the Country Liberal Party members and other Independents by signing a statement to call on the NT Government to “recognise the gravity of the financial crisis facing the Territory and take … action.”

Mr Collins (at left) said Mr Gunner had no understanding of due process.

“Chief Minister, you wouldn’t recognise fairness and due process if it walked up and slapped you in the face,” he said, adding that invoking “Labor Party standards” as the reason for sacking him was disingenuous.

“Every time you do so you make a mockery of Labor values and I’m fairly confident you wouldn’t recognise Labor values if they stood in line and waited their turn behind fairness and due process.”

He added he was expelled from the party for “having the audacity to have an opinion”.

Mr Collins said given that he was locked out of Government offices and was ex-communicated by the Party, he could no longer effectively represent his constituents as a Labor Member.

“It was an improper, in fact illegal, fetter on my role and my responsibilities as a member of this assembly,” he said, seeing his only option as becoming the Independent Member for his seat, Fong Lim.

Mr Collins became emotional when he spoke of the impact his expulsion had on his two young daughters.

“It’s disturbing as a parent to watch how they react to these stresses,” he said.

“They have watched their father interrupt a career as a senior lawyer to come to this place to try to do something good.

“As young as they are, they each have a well-developed sense of social justice, of what is right and what is wrong.”

Mr McConnell (at right) criticised his colleagues for subverting democracy by sacking him for voicing his concerns. He was most critical of the Chief Minister for attacking “how democracy is supposed to work”.

Mr McConnell also joined the Parliament’s Independents and Opposition members to sign a statement calling for the NT Government to better address the region’s “fiscal crisis,” his first public move alongside NT independents since his sacking.

“The fiscal situation currently facing the Northern Territory is unprecedented and threatens the livelihood, security and freedom of each and every Territorian,” the statement read.

Independent MLAs called for a Royal Commission into government finances before there is “no road back” for the Northern Territory.

Mr McConnell raised the motion stating that dysfunction and mismanagement has disenfranchised Indigenous people and is leading the Territory towards insolvency.

He says: “The real issue is not GST receipts, or other Commonwealth grants [tied or untied], but rather the inability of successive Northern Territory Governments to raise sufficient own source revenue [currently only 27% compared to 56% in other jurisdictions] or, importantly, control expenditure growth.”

NEXT: Our ballooning public service.