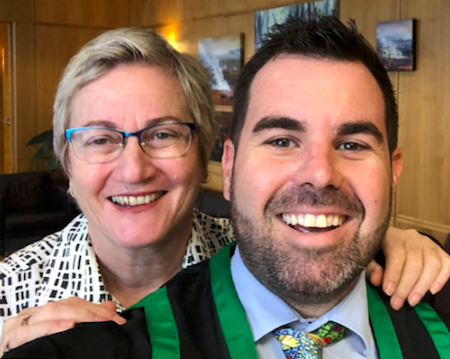 The events are subject of an investigation report by the Independent Commissioner Against Corruption, Ken Fleming QC, to be tabled in  Parliament tomorrow.

Deputy Speaker and Member for Namatjira Chansey Paech (pictured with Ms Purick) is now in the Speaker’s Chair.

The ICAC will respond to questions arising from the report after it is tabled, it was announced today.

Mr Mills called on Ms Purick to “resign immediately from Parliament” saying Mr Gunner needs to “explain why he installed her in the first place as Speaker with such overwhelming numbers in Government, and why he stuck with her as Speaker when the scandal first broke back in October 2018.

“Kezia Purick was the hand-picked choice of the Chief Minister to be Speaker and he has let this continue on and despite many opportunities to address it, he chose not to.

“We are not surprised at the findings and nor should the Chief Minister be,” according to Mr Mills.

He says ICAC Commissioner has found that Ms Purick, by the actions outlined in the report, engaged in “corrupt conduct” between 2018 and 2020.

“This outrageous … conduct is a reflection on the Gunner Government.

“They installed Purick as Speaker and kept her in the job even when she apologised to Parliament and falsely sheeted all the blame to her staff member.

“This is a reflection on the shambles of a Government. Of an absolute failure of judgement by the Chief Minister to continue to back Purick.

“This is another example of what a bad government Labor has been and people who spoke up internally to do the right thing got thrown out.

Deputy TA Leader Robyn Lambley said that if the Chief Minister hasn’t called on Ms Purick to resign from Parliament then apparently he is prepared to allow a member who has been found to have undertaken “corrupt” conduct to remain a member of the Legislative Assembly with his blessing.

Mr Mills says “there is a stench to this which goes to the heart of what we’ve seen as the cosy relationship between Purick and the Gunner Government, which we saw writ large when Purick and the Government used their numbers with the CLP to tear up Standing Orders, the rules of Parliament, to install the CLP as Opposition when clearly Territory Alliance have the majority members of an Opposition party in Parliament”.

The Alice Springs News contacted Mr Purick’s office to offer her the right of reply but we were told: “She does not want to make a statement. She is considering her position.”

The ABC reports that MsPurick has resigned and accused Mr Fleming of exceeding his powers.