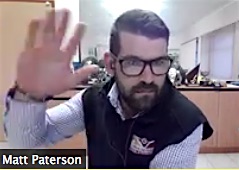 Tonight’s Town Council discussion of  the art gallery issue, which is crucial to Alice Springs, will not have any input from Deputy Mayor Matt Paterson (at left), and the position of Mayor Damien Ryan is unclear.

The mayor absented himself from the recent special meeting about the gallery and the government’s intention to compulsorily acquire the oval. At the meeting, where councillors determined they would oppose the acquisition,  he was noted only as an apology. When the Alice Springs News asked him why he had not attended, he did not give a reason.

Cr Paterson is a candidate for the Territory Alliance in the August Legislative Assembly election, and Mayor Ryan is standing for the CLP.

In a media release last night Cr paterson declared a perceived conflict of interest on the gallery issue “due to Minister Wakefield’s accusation of [Council] Members ‘politicking their decision’.”

We asked Cr Paterson: “On the grounds that you are unable to represent you constituents on a matter of extreme importance to them, are you going to resign as a councillor immediately?”

He replied: “The integrity of myself and my eight colleagues on council has been questioned from the Minister, which is an unfair assertion. Therefore I have removed myself from the discussion so the community will have confidence in the process. I will remain Deputy Mayor and serve the community until the General Election.”

He made no mention of it, but his decision calls into question the mayor’s position, which to all intents and purposes is identical.

As the next council election – next year – is now within less than 18 months, the council has the power to appoint someone as a councillor if a vacancy occurs. 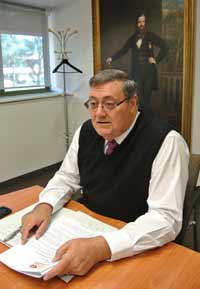 Cr Paterson and Mayor Ryan (at right) could create that opportunity by resigning.

In his media release Cr Paterson said: “I have taken on board the advice given to Council on Conflicts of Interests over the past 6 months and as a candidate in the upcoming Territory Election, I am acutely aware of the perception of, and actual, conflicts of interest.

“When it comes to the battle between the NT Government and the Alice Springs Town Council over the repurposing of Anzac Oval as the site for the NAAG, I believe I have a perceived conflict of interest due to Minister Wakefield’s accusation of Members ‘politicking their decision’.

“The last thing I want to do is have the Government attack the integrity of a council process. For this reason, I will remove myself from all deliberations and decisions on this issue until after the NT General Election on August 22,” said Cr Paterson.

“Territory Alliance is of the view that the Anzac Oval Precinct is not the best site for the Gallery. We consider that any move to use Anzac Oval as the site for the NAAG must come with funding and a solid plan for an alternative site for Rugby League. Without this funding commitment from Government, any deal around the use of Anzac Oval is incomplete.

“In the current economic and fiscal crisis, the timing is not right to bulldoze $5m of infrastructure built on Anzac Oval just five years ago.

“We are also aware that Anzac Oval is culturally and historically significant to the town. Many residents are strongly against the Oval being repurposed for the gallery. We question whether the destruction, waste and anguish caused by repurposing Anzac Oval for the Gallery is really worth it, particularly when there are other suitable, less controversial sites” said Cr Paterson.

“Territory Alliance is actively exploring the suitability and feasibility of other sites for the Gallery. Territory Alliance has committed to locking in a site within the first 100 days of coming to Government.”

Council tonight is set to take a vote on its Conflict Management Policy. It could not come at a more pertinent time.