A pub with no beer no more 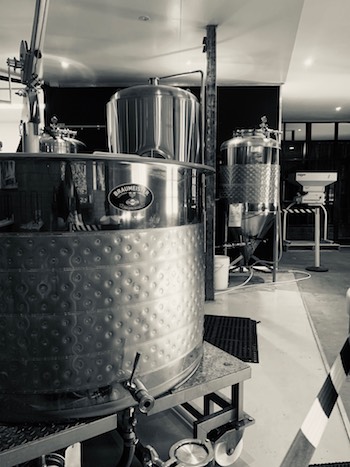 The Alice Springs Brewing Company will be offering tours that show how to make beer on a mass scale, thanks to an NT Government scheme aimed at creating new tourist attractions.

That’s right, the New Normal now has a New Visitor Experience Plan, along with the inevitable acronym, NVEP.

The company and the planned reconfiguring of its brew room was name dropped as a project by the government as it announced just under $500,000 for 17 businesses across the NT.

The scheme gave businesses grants of up to $50,000 as long as they can match the amount themselves.

For the brewing company this means they can add a new dimension to the experience they already offer: pizza and beer.

“We’re basically moving a lot of the equipment into a room behind the bar to establish a more defined tour,” says founder Kyle Pearson.

“It will be a lot more hands on. Another element is people will be able to do brew days with us.”

Some of the money will buy a custom labelling machine for people to bring home from brew days, as well as more brewing equipment.

“We’ve always had to sort of hold back because of our capacity. We’ve never had enough beer or enough capacity to go hard into the Alice Springs market or the national market.”

However, the tanks probably won’t be in until later in the year due to the less than ideal trade climate for items being shipped from China to Australia.

Which for now is fine, says Mr Pearson, as the main goal is “to create a new tourism product.

“People have often asked us if we have a tour, and we didn’t. The layout of the brewery wasn’t suited to do a tour. This is establishing a touch and feel element of the business.

“There are no tourists now, but when the tourists start coming back again we’ll be good to go.”

The grant comes on the heels of the first weekend back in action for the Brewing Co as well as Mr Pearson’s other business, Monte’s Lounge.

While it was good to see people in the venues, Mr Pearson says that due to restrictions, it simply isn’t feasible to expect the same kind of money through the tills as in pre-COVID times.

For example, Monte’s Lounge can fit up to 400 patrons in regular circumstances (pictured). Under the current laws, the capacity is 140.

“It does show in the takings, but we’re just happy to have any takings at this point,” says Mr Pearson.

“I think every hospitality worker in Alice Springs will tell you that it’s good to be back at work.”

By GEOFF MIERS A plant commonly referred to as bottlebrush comes in all shapes and sizes and can add real colour and charm to the...
Read more