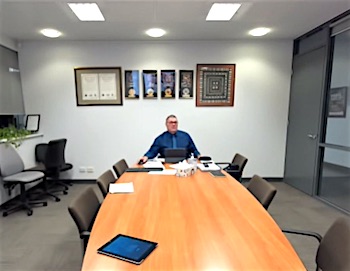 The Town Council’s end of month meeting last night went by at an unusual clip, the open session drawing to a close after just an hour and a half.

Left: Chairing the council meeting by Zoom is a lonely affair – Mayor Damien Ryan  socially distanced in the board room.

This was partly because the main items of business were postponed. These were the three proposals by councillors to provide relief to the community in response to the COVID-19 shutdown.

They will now be considered early next week in a separate decision-making meeting.

But Mayor Damien Ryan in the chair seemed to be pressing more than usual to get through business quickly. Perhaps this was to get an early start on the confidential session, which had legal advice on the possible compulsory acquisition of Anzac Oval to consider. This advice remains under wraps.

Also on the agenda, and related to two of the councillors’ proposed relief packages, was the NT Government’s Public Benefit Concessions Policy for Commercial Ratepayers, supporting a fund to go towards waivers for commercial ratepayers in the first quarter of 2020-21, followed by a deferment in the second quarter.

The Elected Members voted to adopt this policy, the necessary first step before seeing just how much money will become available locally (a total of $6m  is available for all Territory councils).

Officers had done some analysis of the impact of their proposals, as well as of Deputy Mayor Matt Paterson’s voucher scheme, the critical questions being how would the proposed measures be funded and what impact would they have on council’s service delivery.

Officers also had an alternative to propose: a $5m COVID-19 reserve. Just how it will be spent will
be the subject of budget discussions in the coming weeks, with announcement of confirmed measures in June or July, they proposed.

Meanwhile, there has been minimal uptake of council’s offer to defer rates payments in hardship cases, with just four applications from commercial ratepayers, and two from residents.

Although the numbers seem tiny, Director of Corporate Services Sabine Taylor, to a question from Cr Jacinta Price (above left), said that it was “most unusual” to have four hardship applications from businesses.

Cr Price, while supporting the idea of $5m reserve, also asked about returning it to general revenue if it is underspent, in the case of the community turning rather towards relief from other governments’ measures.

It would be a matter of adding words like “as required”, said CEO Robert Jennings.

He agreed with Cr Melky (above right) that councillors should take the time to absorb all the necessary information in relation to relief measures “to get this right”.

Councillors supported his suggestions that officers workshop with them the various considerations, which would be followed by a special general meeting to formalise the outcomes.