April 2, 10.30am
An Alice Springs woman who recently returned from the Gold Coast has been diagnosed with COVID-19, according to a media release from SecureNT.
She is in the Alice Springs Hospital after being in self-quarantine since her return.
Under national medical guidelines, contact tracing on her flights is not required due to the delay between her return and becoming unwell.
There have now been 21 cases of COVID-19 diagnosed in the Northern Territory, all acquired interstate or overseas.

Staff from the Devil’s Marbles Hotel (pictured), 700 kms north of the SA border, say a car from South Australia, which has entered the NT today, is due this afternoon to spend the night.

The travellers have booked by phone, will not enter the hotel, sleep in the car and leave tomorrow for Darwin.

This is clearly in violation of the requirement for the travellers to spend 14 days in isolation as soon as possible after entering the NT (see comment below dated March 26, 5.50pm).

It means the car will have passed Kulgera, Erldunda and Stuarts Well, have driven through Alice Springs, and passed Aileron, TiTree and Barrow Creek.

It seems clear Darwin is being accepted as destination for self-quarantine by the control station at the SA border.

The staff also says when they contacted SecureNT they were told that’s OK so long as there is no contact between the staff and the travellers.

There seems to be much confusion, says the staff member.

“A lot of people are out there who can knock on your door and make sure you are at home. More than police officers.”

This statement from Chief Minister Michael Gunner (below right) at a media conference in Darwin yesterday was to emphasise the surveillance in place of people obliged to self-quarantine for two weeks after entering the NT.

Mr Gunner shared the conference with Police Commissioner Jamie Chalker (below left) who said the Chief Health Officer can appoint authorised officers to assist him: “We are using environmental health officers, and other officers” to carry out compliance checks. 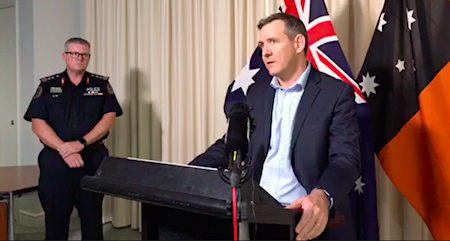 Commissioner Chalker said the Australia Defence Force “may be able to be deployed to assist another officer … just so we don’t get too stretched with our resources.

“If that comes to fruition nobody in the Northern Territory needs to be concerned that we’re going into Martial Law. That’s not the place we’re moving to. We are trying to gain a lot more reassurance through this approach.”

Commissioner Chalker said at about 3pm yesterday the number of people checked stood at “200 in the last two days” and there are “steps to increase that”.

“Fewer than five” had been found to be non-compliant but no infringement notices had been issued.

Commissioner Chalker indicated that is likely to be tightened soon.

Added March 28 at 3.12pm: Mr Gunner also said tomorrow “we are moving from spot-checking to full-scale-checking. Every single person who is required to be in self-quarantine – whether they have come from overseas or interstate – will be checked. And if we need to, you will be directed from your own accommodation and isolated in mandatory controlled quarantine.

March 27, 12.33 pm:  Testing is being extended to frontline workers – Minister Fyles mentioned police officers, teachers, childcare workers, disability workers – so that they know their status and do not have to self-isolate but can return to work. Presumably health care workers are already being tested.
Police have roadblocks on internal Territory roads (as well as at the borders) in an effort to control internal movements (to and from remote areas). 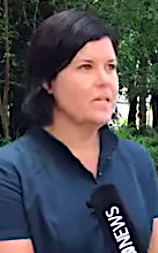 March 27, 12.15pm: FIRST CENTRAL AUSTRALIAN CASES
Repeated questioning by Darwin-based media of Minister for Health Natasha Fyles (pictured), at a press conference this morning, has not revealed whether the Central Australian couple are from Alice Springs and whether they self-isolated in Alice Springs before being tested.
They returned from overseas (a holiday in Austria), taking Jetstar flight JQ664 from Melbourne to Yulara on March 22, where they picked up their own vehicle, drove to their home – it is not clear where that is – and self-isolated.
Their positive test results were confirmed yesterday and they are now in Alice Springs Hospital.
The Minister was asked repeatedly whether she knew whether their home was in Alice Springs or a remote community.
She repeatedly said she was sharing as much information as she was aware of or was appropriate to share.

March 27, 11.43am:  The Central Australian couple tested positive for COVID-19 are being cared for in Alice Springs. These are therefor the first local cases.

March 27, 10.35am: Response from police to question below
“No arrests have been made.”

How many of the 150 people rioting were arrested? How many have been charged? It appears all violated the COVID-19 rules making each of them liable to a fine of $62,800.

March 27, 5.20am (last update 7.17am): Central Australian couple test positive.
SecureNT says “a couple from Central Australia” have returned positive tests after being overseas. 12 Territorians have now been diagnosed with COVID-19. It is not clear from the release whether the Central Australians are being cared for in Darwin or have come to Alice Springs.

The scenario sketched in his Reader Comment by Local1 would be a bit of a stretch.

SecureNT says self-quarantine needs to be “at the nearest available suitable accommodation” and that’s unlikely to be in Darwin if you arrive from South Australia.

There is enough on the form (mobile number, licence plate) to track you down for a spot check.

The rules say: “Accommodation options are available throughout the Territory, with a number of roadhouses and wayside inns offering rooms suitable for self-quarantine purposes.”

To say “I didn’t like the curtains” wouldn’t cut it to relieve you of the maximum $62,800 fine. This is a life and death issue.

“For two full weeks, you will need to stay in accommodation with a bathroom and not leave the room,” say the rules.

“Accommodation providing shared bathroom facilities and/or communal kitchens are not suitable for the purpose of self-isolating.”

And you’re likely to be eating at room service prices: “Under new restrictions, hotels and roadhouses do not have dining facilities available. As part of your self-quarantine measures, you will need to arrange for meals to be delivered to your room if required.”

March 26, 2.24pm
Request to SecureNT for response to comment by Local1.

March 26, 1.45pm: Government urges remote people to go home now.
From midnight tonight people going to designated bush communities will have to self-isolate for 14 days before they can enter, and that includes residents returning.
It is a new Federal Government rule but it is State and Territory governments which will “communicate” the areas where restrictions apply. This has not yet occurred in the NT.
The Governments will support people who do not have appropriate alternate arrangements to self-isolate.
There will be exemptions to the travel restrictions for people entering to supply and deliver essential services.

Where are the designated areas [see next item] in the southern half of the NT? What support will be provided to people who do not have appropriate alternate arrangements to self-isolate?