Above: Paused, drilling at the Kyalla well site. Photo from the Energy News Bulletin.

“Given the unprecedented circumstances brought about by COVID-19”,  Origin Energy will temporarily pause activities at their Kyalla well site – exploring for shale gas – and reschedule further work to the second half of the year.

The company advised the NT Minister for Primary Resources and the CEO of the Northern Land Council  of their decision yesterday.

The company, however, remains committed to their Beetaloo project.

According to its media release of today’s date, “activity on site is minimal and includes road works, installing water monitoring bores as required by regulation, and safely packing down the rig and moving it to the side of the lease now that drilling has been successfully completed”.

“We currently have 45 employees and contractors accommodated in a self-contained camp, 14 of which are Northern Territory residents and the remainder from interstate. Nobody on site has flown in internationally.

“Those on site are observing health authority requirements for social distancing and we are also maintaining separation between Territory and interstate team members.

“We will progressively reduce our presence to essential personnel only, ensuring we meet regulatory and environmental management conditions to monitor and maintain the site.

“Those leaving will follow controlled travel plans and not travel through communities on the way from site.

“During this interim period we will use Northern Territory based employees and contractors to undertake civil and other works in preparation for the resumption of activities later in the year.”

The announcement comes after a sustained campaign by locals and anti-fracking activists, raising concerns for the safety of remote communities  potentially exposed to infection from FIFO sources.

Get-Up yesterday was calling on the NT Government to declare fracking a “non-essential service” as it would be “endangering remote communities”.

Lock the Gate Alliance expressed similar concerns – “that governments’ appeasement of the lobby groups for mining, oil, and gas industries is putting the health of workers and communities at risk as COVID-19 continues to spread.”

Mining and energy employee are among those listed as able to apply for an exemption to the NT’s travel bans. The exemption is conditional on their employers having a plan, approved by the Chief Health Officer , “on how it proposes to manage transmission amongst its employees and prevent transmission to the wider community”.

The Alice Springs News has requested comment from the Minister and from Lock the Gate Alliance. 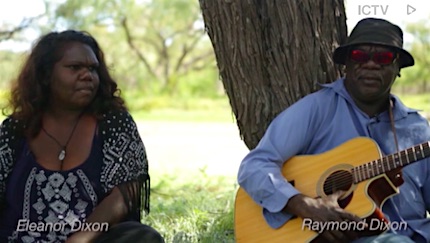 Ray Dixon, a Mudburra man and Native Title holder for the site where Origin is drilling its Kyalla well welcomed the news from Origin that they would be removing their interstate FIFO staff.

Left: Ray Dixon with daughter Eleanor Dixon who perform together as Rayella. Screen capture from their video, Warlungka: Language Lived Through Song, on ICTV.

“The announcement today comes as a welcome relief to our communities and Native Title holders,” he said, in a release from Lock the Gate Alliance.

“We never wanted fracking in the region, and we remain concerned about the damage it can do to our land, water and communities. We have been very clear to the NT Government, the Health Department and the Northern Land Council that we opposed giving special exemptions to fracking companies to continue operations that put us at risk of spreading the Coronavirus.

“It is good to see Origin will stop fracking plans at this time, but we are still to see a full guarantee that all subcontractors will be removed from site, and works stopped to protect our most vulnerable people.”

Protect Country Alliance spokesperson Lauren Mellor said this pause needed to include all Origin subcontractors from overseas and interstate. She said the Alliance also remained concerned about protocols for the workers who would remain on site.

“Thirty-one of Origin’s 45 Kyalla Well workers are from interstate, and will be leaving the Territory soon.

“With many states having closed their borders already, this is an example of how continuing FIFO operations are inconsistent with public health measures being taken to combat COVID-19.”

Ms Mellor said all other gas companies with plans to drill and frack should also halt FIFO operations in light of the COVID-19 crisis. Companies with NT gas exploration plans for 2020 include Empire Energy, Santos, Imperial Oil and Gas, Pangea and Hancock Prospecting.

“Local communities are also seeking assurances that unnecessary meetings to force the fracking implementation process are also put on hold during this dangerous time for Elders and remote communities,” she said.