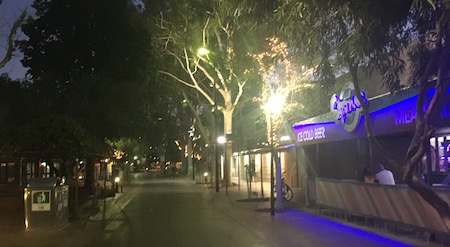 A few people (pictured) enjoyed drinks at Sporties in The Mall last night.

As of noon today restaurants are among the facilities that “will be restricted from opening,” according to a media release from Prime Minister Scott Morrison, as a measure to combat the Coronavirus.

And the Rotary Clubs in Alice Springs have announced the world famous dry river regatta, Henley on Todd (pictured), held since 1962, has been cancelled for this year.

“We will continue to plan a spectacular 60th anniversary event in 2021,” say the clubs.

• Restaurants and cafes will be restricted to takeaway and/or home delivery.

• Religious gatherings, places of worship or funerals (in enclosed spaces and other than very small groups and where the one person per four square metre rule applies).

“Isolated remote community hubs are not included in these restrictions,” says the release.

“Other facilities are not impacted, but will be considered under stage two restrictions, if necessary.

“These measures also apply to outdoor spaces associated with the above venues.”

These “enhanced measures” build on existing measures to slow the virus and save lives, says the release.